REVIEW The Demonologist by Andrew Pyper 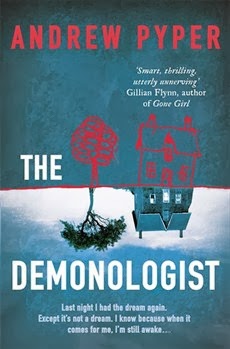 What if all of it isn't merely allusion but literal history, an account of actors performing verifiable actions, both long ago and reaching into the present?


Andrew Pyper's The Demonologist is a swift travelling, deeply thoughtful and highly enjoyable novel. This comes as no surprise to ShadePoint; we loved The Guardians a lot, and reviewed it here.

On the face of it, The Demonologist might be seen as something of a departure for Pyper. While The Guardians was in many respects a small town ghost story - and a great one at that - here is a story of movement that crosses the globe to Venice, across the USA, Canada. It is not a story about one isolated intervention of otherness, but potentially a struggle between Good and Evil at such a high level the terms themselves need CAPS, and the battlefield is enormous.

There are a few reviews that compare The Demonologist to The Da Vinci Code, or at least novels of that type. This is in large part due to the central character, Professor David Ullman, who just happens to be one of world's leading authorities on demonic literature - and in particular, 'Paradise Lost'.  He has something in common with the-weary-academic-thrown-into-mad-adventures genre. Dealing badly with a crumbling marriage, surviving mostly because of his 11-year-old daughter Tess and his friendship/unfulfilled romance with Elaine O'Brien (from the Psychology Department), Ullman's world is about to be thrown into an entirely different path when a mysterious visitor, The Thin Woman, materialises by his office, and offers to pay him handsomely to visit Venice, to view "a phenomenon". Ullman takes Tess to Venice with him, witnesses something incredible, there is a terrible tragedy, and on his return across the Atlantic the story plunges him into the demonology road trip to end all demonology road trips.

While this storyline, with its initial echoes of that macabre masterpiece 'Don't Look Now', may seem as we say a bit of a switch from The Guardians, it isn't really. There's plenty of small town, for a start, in one of the most vividly realised and breathless fictional road trips and chases we've read for a long time - with the descriptions of motels and diners, towns that seem inches from deserted yet pulse away with some indefatigable refusal to give in, the pizza and beer and perpetuum mobile lifestyle that part of us all craves in some way (without the demons and the damned of course). But it is a sort of damnation of its own, isn't it - the motel and six pack and the closed threadbare curtains to lock in despair, a release that feels like it might be found, but really can't be found in the solitude and dark? Ullman is running and running, but with real devils at his back it seems - from one eerie set piece to another. There's a dual reading here though as Ullman falls deeper and deeper into despair - is it all real? Is all this real?

When Ullman is joined on his lost highway by O'Brien, now on a desperate voyage of her own, the novel switches up another gear towards a thrilling chase (and unbelievably brutal struggle, by the water's edge, which will have you wincing) and an ending that despite some uncertainty ShadePoint has seen in other places, we found deeply moving and apt. Without giving away any spoilers, it would also seem entirely possible that there could now be a series of books set in this universe.

While Venice is undoubtedly the early focus, and 'Paradise Lost' a key driver for the storyline, The Demonologist isn't really a Da Vinci Code book at all, it isn't rooted in libraries and dusty archives - and there's nothing wrong with that at all - it retains a greater supernatural genre emphasis, and most of the book takes place on North American highways and byways. There's more pilsner and pizza than Ponte di Rialto in places - and 'Paradise Lost' is less a code book in the end, than something more personal. One section of the book is not unlike one of the best set pieces of Stephen King's Dr Sleep and retains the same hollow-eyed travelling through the night quality of that storyline. There is less of the ancient manuscript and uncovering of clues in remote monasteries and cathedral basements that some of the marketing (see the book trailer below) might have you believe - and the book perhaps has more in common with the thematic approach to a similar quest of that utter masterpiece The Dumas Club by Arturo Peréz-Reverte than it does with Dan Brown.

But The Demonologist retains the same core that made The Guardians so enjoyable - characters that struggle to hold on to their humanity, whatever the cost, who lead fairly ordinary lives but find themselves in extraordinary situations, enduring great batterings of fear, love and loss and striving to get things to make sense and just to live - in the face of the wordly and the otherwordly, and whether things really are the way they are and whether this really is all there is. The Demonologist knows all this stuff is scary enough, even before the Demons turn up.