REVIEW The Chemistry of Death by Simon Beckett 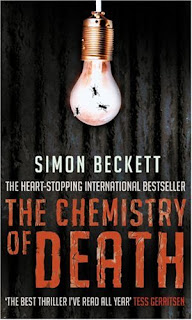 Round Two of the Great Transworld Crime Caper for me, and it's The Chemistry of Death by Simon Beckett. I chose books by authors new to me, and so far it's paid off. Full Dark House by Christopher Fowler I enjoyed immensely, and The Chemistry of Death likewise. Maybe not as much, and in different ways, but I still enjoyed it. One of the great things about the Crime Caper is the way it introduces you to first novels in a series. Yes, it'll do no harm for sales if any Caper Folk get hooked, but it's exciting to read books that might otherwise pass you by.
The Chemistry of Death might have passed me by. It's about a serial killer for a start. As a rule, I don't review books on Shade Point that I just don't particularly like, and I'd have to say that virtually identical serial killer novels are frequently the ones that go astray. There just seems to be a proliferation of very similar novels - where the central character from one writer's book could just as easily leap into the work of another, so samey are the general ideas. They are increasingly outlandish too, with all sorts of Liquorice Allsorts Man, The Nose and Lips Keeper and leaving a piggy bank as a calling card style conceits, that actually, rather than up any ante, have the opposite effect. They are copies, essentially, and very often forget that amidst all this gore and horror, there needs to be some universal point, some human point of connection, that the reader can come away with. Some understanding. Not of killers and motives or the way the edges of a wound say this or that, but some understanding of what the author is trying to say, what it all means. The best crime writing always does this. Some of the serial killer novels around, for all their novelty and ingenuity, are simply slaughterhouses: hell on earth for the sake of hell on earth
The Chemistry of Death, like Belinda Bauer's Darkside which I also reviewed recently, is a level above all this. Yes, it has elements of the formulaic serial killer novel, and yes, the ending has a couple of Silence of the Lambs style feints (a successful device overused), but it is a different proposition. Like Darkside, it is set in a very small, closed rural English village. The claustrophobia of this setting, the paranoia it creates, and the sense of a small space growing ever smaller are all successfully conveyed. Critical to this is the patient building of the environment, so that when the first murder is revealed, for all its outlandishness, it somehow doesn't seem formulaic, but part of a narrative that seems believable. The world of Bones hasn't suddenly been dumped in the English countryside from nowhere, and forced to make sense.
The book is about a forensics expert called David Hunter - a recurring character in following novels in the series - who moves to a tiny village in Norfolk to escape a trauma in his life. His past as a forensics guru of some standing, frequently called upon by Police, he is intent to leave behind. He becomes a GP in close-knit little Manham. Three years later a gruesome murder jolts Hunter from his path, and alongside a detective Mackenzie he is plunged back into his old life.
And really, it works very well. This is in part because of the skill with setting I mentioned before, but it is also to do with Hunter and how his backstory is dealt with as the main narrative drives forward. Through dream sequences, Hunter is in effect communicating with his past, and this gives the novel a supernatural edge that while being quite eerie is also important because it creates that much needed human connection. There may be a serial killer on the loose, but this is still a novel about more than catching a serial killer. It has much to say about love, and loss, and grief, and the mechanisms of coping. The chemistry of living is as much in this book as that of death. Of course, with a forensics expert as a main character, we're often surrounded by maggot trails, and larvae and bones - there is more than enough of that to keep the fans of gore happy - but we are also party to regret, compassion and tenderness. One dream scene in particular, towards the conclusion of the book, was incredibly moving. I'll mention Johan Theorin at the drop of a hat (or even in a review) but there is something of that writer's handling of the strange borderlands between life and death, natural and supernatural, at work in The Chemistry of Death.
The tension is handled very well, and there are some incredibly suspenseful moments. At one point I was reminded a bit of that great PD James novel, Devices and Desires. Both are serial killer novels, and both are set in Norfolk. Beckett also has something of that incredible skill James has for heart in the mouth descriptions of imminent danger. I've slightly hinted that I had one or two problems with the ending, but I won't go into them - they would only be spoilers for what I think is an incredibly assured debut for Simon Beckett's David Hunter, and I suspect the remaining books in the sequence build on this considerably and I now look forward to reading them all.