REVIEW The Business of Dying by Simon Kernick 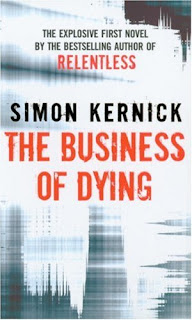 And so, with a dodgy shooter in one hand and a pint of Pride in the other, Shade Point's Great Transworld Crime Caper comes to an end in a hail of bullets with Simon Kernick's The Business of Dying. First published in 2002, this is a blunt instrument of a novel to be sure, an all action tale of hard as nails DS Dennis Milne, and his attempts to find the brutal killer of a young girl found as day dawns by the side of a London canal.
What makes The Business of Dying different, however, is that DS Milne also happens to be a killer himself, living a life very much outside the law he is sworn to protect. The smoke has barely cleared from the barrel of his own gun when he is by the side of the grim canal, looking down on the body of the murdered girl. In his introduction to the novel, Kernick talks about how this central contradiction drove the writing of the book, and how Milne's own murderous life suddenly intersects with the case he is investigating: Milne is "both the hunter and the hunted, his two diametrically opposing worlds collide ..."
So, while Milne is investigating the death of the young girl, he is in effect on the run from the forces of the law himself, not to mention outlaw forces increasingly interested in his demise. To say too much about how this happens exactly would be a bit of a spoiler, I think, so I'll leave it at that. It is just enough to know that Milne is a killer, that this is a novel where the central character wrestles with his own guilt, where the balancing point of morality is never clear-fixed. This is driven by the hugely effective first person narrative from Milne's point of view, and what Kernick achieves is a wrestling match for the reader as they find themselves siding with this seemingly amoral anti-hero of his, while being terribly aware that he is a killer, and a killer with a spiralling body count at that.
In this respect, I was reminded of The Talented Mr Ripley. There is something of Ripley's almost comical descent into multiple murder in the way that Milne, albeit for different purpose, falls deeper and deeper into the abyss. There is one scene in particular that describes the fallout from a misfiring pistol that is grotesque, darkly comic - excruciating even. Very like the way Highsmith has the reader almost disorientated with Ripley's endless audacity. Yes, something like a cross between Robinson's Inspector Banks and Tom Ripley and you have some idea of how Milne's story pans out. 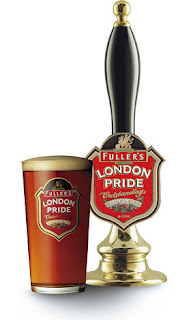 Aside from the edge of the seat drama sustained by the ambiguities and conflicts of Milne's dilemma, the novel is successful in many other ways. It is a superb evocation of London, for example, particularly the world of the pubs, the clubs and the grimy backstreets. King's Cross lurches from the page, and the detectives criss cross the city on car, by tube, on foot. There is a really gritty, hard boiled sense of London the city in this book that impressed me a great deal. You could taste the pubs they were so simply but effectively described. It was a novel of thirst for sure - Milne downs Pride, Fosters, unbranded budget lager, wine, brandy, Heineken ... It certainly had the Shade Point fridge stocked. Rather like Regan in The Sweeney, it is hard not to imagine Milne being half-cut almost constantly.
Seriously though, this is a terrific novel, and a great end to the Caper. Any book that has me referencing Ripley - one of my all time favourite novels - is always going to have gone down well. The Business of Dying is a brutal, action packed crime novel, but it is also a brooding Shakespearean affair, where the central character is plunged into a cauldron of right and wrong, good and bad - an acute examination of whether good people can do bad things yet remain good. Or not. Where an eye for an eye is king and the measures of sin are weighed. This penitential heart of the story is very successfully rendered and Milne's desperation for some form of redemption or forgiveness, even when he seems completely deluded and lost, mark the novel as something quite different from many others in the genre, and Kernick as a very fine writer indeed. It is in the end some kind of bullet ridden morality play, running scared and dangerous through the London night - to a place where there is likely to be no solace at all.