REVIEW Have Mercy on Us All by Fred Vargas 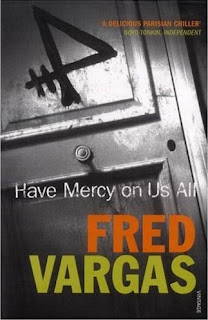 After a couple of disappointing books that didn't make it on to the site, Shade Point has cracked a seam of gold with Have Mercy on Us All by Fred Vargas.
Having arrived terribly late to this brilliant writer's work - it is amazing how authors pass us by sometimes - it was with a steadily mounting glee that I realised I had stumbled into a new series to follow and cherish. I was pretty sure I was going to enjoy it before turning the first page, mind you - all the Shade Point favourites were there. A touch of gothic? Yes. Old manuscripts and twisted history? Check. Rumpled, eccentric detective? Mais oui. Some novels are just so good it is like the author has written them especially for us, so clearly do they hit the target. Fred Vargas's work is exactly that for me.
Have Mercy on Us All introduced me to Detective Commissaire Adamsberg, a wonderful, eccentric creation, and his instinct-driven investigation into macabre events arising from the appearance of eerie symbols painted on Parisian doorways. Harking back in origin to the days of The Black Death, these ominous signals lead inevitably to grotesque corpses cluttering Paris and plunge Adamsberg into an investigation that takes in all things from a unique means of transporting rat fleas to the intrigues of life as a modern day town crier. Throughout, it has an almost Magic Realist sensibility, and if Adamsberg resembles a quirkier Morse - as suggested on the dustjacket - it is Morse viewed through the kaleidoscope of Garcia Marquez. Actually, it also reminded me a lot of one of the best books I have read - the utterly brilliant The Dumas Club by Arturo Perez Reverte. Like Reverte, Vargas is writing a thriller, but the thriller genre in such hands becomes a vehicle for an intensely intelligent dance across metaphysical boundaries - surreal, magical, spiritual even. Life and death are not separate worlds in Adamsberg's investigation - they speak with each other, across time, across the instincts and desires of the characters.
Highly visual, Paris leaps to life in this book, and filled with a veritable 'cast' of characters (as if Paris has become a circus troupe), the novel builds from a whispery, surreal opening into a tense and fairly chilling unravelling of the plot, the normal order of things, and our perceptions of the way the way the world works. Adamsberg throughout is then an enigmatic presence - comfortable and admirable at times, yet dark and suddenly destructive at others. He follows hunches, feelings, memories and signs. He has one foot in the real world, the other in, well, the "other". His colleagues are exasperated by him and in awe of him in equal measure. The more fantastical the nature of the situation developing before him, the more bizarre the clues, behaviours and atmosphere, the more Adamsberg is actually investigating things that become very much within psychological understanding, and these outlandish trappings conspire in some alchemical way that in the end renders them more realistic, more about actual human emotions and beliefs than events in novels that are actually supposed to be 'real', to be 'gritty' and 'say things as they are' and so on. There is more about human nature in a paragraph of Vargas than an entire book from the increasingly loud and noisy ranks of serial killer novels bending the shelves in your local WH Smith.
I loved the interplay of historical information with the modern-ish day plot development (there is a timelessness about the Vargas procedural), and the occasionally surreal way this combines. There is something deeply eerie about the Plague-era iconography and language carried into Adamsberg's world, and the way Vargas builds the investigation's momentum is thrilling. I like mystery novels that connect to the past - where the weight of the past seems to infiltrate contemporary action and thought. I liked the learning of it, its intelligence and empathy, and the mining of a bygone age to assist in the uncovering of modern truth and moral balance. It created an atmosphere, a miasma of dread and madness across the whole story that was wonderfully done. Not that it is all serious of course: there is a fault-line of black humour up the middle that is hugely enjoyable. But ultimately, this is sincere, important writing.
Overall, I believe Fred Vargas to be downright brilliant, and I love her work.