REVIEW The Map of Time by Felix Palma 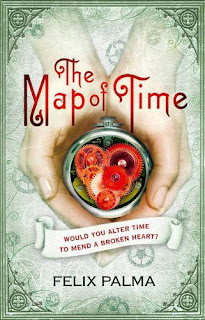 The Map of Time. El mapa del tiempo. Le carte du temps. Die Landkarte der Zeit. This feels like one of those massive international 'moments' for genre fiction - like The Name of the Rose and mystery maybe - when a novel has the potential to be read so widely and discussed so fully that in the end it will be hard to escape the buzz - whatever you make of it, and whether it really is genre fiction, or not. By the time it is released in this country, it will already have been published in twenty languages. Compared in advance word to Jonathan Strange and Mr Norrell, The Time Traveller's Wife and The Shadow of the Wind it is something of a sensation in the making. The knock on effects for speculative fiction may be extremely beneficial to the genre.
Part of the reason for this might be the sheer scale and almost madcap ambition of the book. At times I put it down in amazement, really, and marvelled at the complete nerve of Palma in telling this tale the way he does - so unfashionably escapist, romantic, self-effacing and charming that it is, yet complex and ingenious. It is a novel completely unafraid to sideline apparently central narratives, leap wildly about in terms of what is 'real' within the novel and what is not, and manipulate historical accuracy with gleeful abandon. It is filled with action, romance, philosophy and head bothering time paradox. It is a total delight.

Roughly speaking the novel is about HG Wells, and how he becomes involved in a network of separate time narratives - his own life, the story of a distraught lover whose life is destroyed by Jack the Ripper, the cross-century romance of Claire Haggerty and the dashing Captain Derek Shackleton, and the year 2000's War of the Automatons. Into these strands drift a wild cast of real and imaginary figures - Bram Stoker, for example, Joseph Merrick and Henry James. Conan Doyle appears by association from time to time, gently and knowingly mocked for his more fantastic leanings.

There are just so many inventive little nods to the fictional genres the story inhabits - there is a character in the fictional Wells's world called Jeff Wayne, for example, automatons have become so powerful at one point they threaten humanity like some steampunk Terminator story, and a time traveller who has gone back in time to influence the past is even called Rhys (Reese??). Brilliant, too, is the magical little storyline Palma weaves about the physical time machine Wells keeps in his attic! There will be many more of these superb asides in the book I have missed - to the extent that it will need to be read at least twice to pick them all up. The whole thing is relayed by the ultimate in omniscient narrators - slightly arch, roguish, sentimental. It's a device that can crash and burn, but not here. 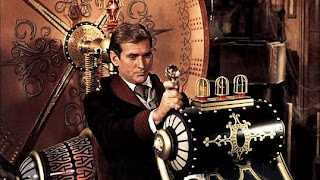 And the plot construction is like a Rubik's Cube, where every time you turn your back on it, someone switches one of the little colour squares. It's a cliche to say that nothing is as it seems, but with The Map of Time, that's how it is. Sometimes you spot it, sometimes you don't. Sometimes the reveals are so audacious you just feel like laughing out loud with the nerve of it all. The question of whether anything is any less real while it is engaged with only in the imagination, Palma engages head on. What is the imagination? What is in there?

Some critics may weigh in heavily on some of these plot feints and devices, but they'll be missing the glorious saturday morning serial wonder of it all I think. It's such an ambitious novel, it'll just be one of those books where everything you read about it might indeed be true, and you'll have to read it yourself to see where you stand. It has the potential to be a The Da Vinci Code for 2011, for that reason. But it is a much, much better book.
Categorising the novel is as challenging as following the sleight of hand of the plot - yes, it is a time travelling mystery, but in some senses it is a romantic novel. It is also a science fiction novel, even a steampunk novel, and it is a novel about HG Wells. It is a novel about time, and a novel about human choices and the paths taken or not. At times it is refreshingly sentimental and loving, and at others a true adventure story. This breadth of appeal has the capacity to make The Map of Time a world bestseller, a great screenplay, a great Darren Aranofsky movie and so on.
For Shade Point, it was always going to be a home banker, mind you. I'm a huge fan of HG Wells, stories about time travel, Victoriana, and so on. Like The League of Extraordinary Gentlemen this mad alternative fact/fiction world was never going to miss. I mentioned quite a few books at the opening of this review, and the comparisons to those are clear, but as a guide the book it reminds me of most - in terms of the atmosphere, the 'feel' of it - is Mark Frost's wonderful The List of Seven, a novel that deserves much more attention than it actually gets. In fact, so fond is my memory of Frost's book, and so often do I reference it, that I really must read it again for this site - just to check that it is as good as I remember! Due to the HG Wells/Jack the Ripper element, there may also be comparisons made with Time After Time, which is a fun piece of time travelling hokum I have a bit of a soft spot for!

The List of Seven might be my only cautionary note - it's incredible to me that this novel has faded as it has. It shows the fine line between success and relative obscurity that The Map of Time spins on - but this only succeeds in reflecting one of the key themes of the novel itself. Aranofsky is worth coming back to here, because I loved the time bending The Fountain, but it somehow wasn't a big success - there can be no telling, and Palma's Wells agonises almost constantly on this danger, this weight. The fictional and the real Wells need not worry - Palma very persuasively argues the case for HG Wells as one of the most significant writers ever, and that he certainly is. The sheer level of growing international phenomenon around The Map of Time, regardless of the UK reception, will make sure Palma is okay on that score himself, I hope.
Enjoyable romp though it is, I don't want to leave The Map of Time in bestseller land, in case I've just conveyed a sense of it as only escapist flim-flam. It is and it isn't. It does have an innocent delight in magical storytelling, and has great fun playing with the reader, there are robots and fighting, but it also carries a significant emotional impact - a bit like Graham Joyce's brilliant The Silent Land which I reviewed last month. As I said, it makes us think about the choices we make, the people we love, and the fleeting nature of time. It is about artistic achievement and what makes great art transcend time, and the art of writing itself, how it can capture or save time and memory in the making and telling. It considers the very human desire for something of us to remain, to sustain, and how indeed this might be achieved - by the imagination, perhaps, by love? I found the ending of The Map of Time quite profoundly moving, and put it down with the sense that I had read a really wonderful book. 500 pages flew by in an instant, as if viewed from the upholstered cockpit of the Time Machine imagined by that amazing Mr Wells.