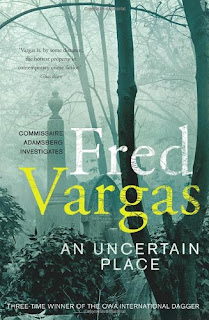 The complex threads of other people's lives did not escape the notice of Adamsberg, even if those threads were whispers, minute sensations, puffs of air...
And so, Shade Point's giddy romance with the Adamsberg novels of Fred Vargas continues. Hot on the heels of discovering Vargas for the first time with Have Mercy On Us All  (see here for the review) and thanks to those very kind people at RandomPR, here we are with An Uncertain Place.
Vampires this time. Cloud-shoveller and all round wonder Commissionaire Adamsberg is investigating vampires. Not that you'd know it to begin with. First he's abroad in London to discover an array of old shoes filled with severed feet in the gloom of Highgate Cemetery. Then, in Paris, he's called to an apartment where a man has been obliterated, bludgeoned missing through the services of miscellaneous sharp, blunt and powered devices. And the use of an anvil, probably. There is a great big trace of the victim all over the flat, of course, but for all purposes he has been disappeared to a pulp. Within these first forty or so pages of the book, a complete storytelling tour de force, the reader is flung headlong into the surreal, magical world of Adamsberg once again. To Shade Point's considerable glee, An Uncertain Place, and this seems scarcely possible, is an even better book than Have Mercy On Us All.
Adamsberg is to a large degree the key to the series' success. What Fred Vargas has done with Adamsberg is create a genuine literary hero, a unique, stand-out individual that while he may have some aspects of other famous creations in his make up, emerges as his own man - his own, muddled, brilliant, confusing, ingenious man. He gets under the skin because he is fascinating, because his traits are so consistently fed into the whole novel, for the admiration he gets from some of his equally out-there colleagues, for his total unpredictability. The broader success comes from the people and the attitudes that surround Adamsberg, the Paris that is at once the real Paris, but is yet again some kind of dream version of the city. Shade Point is moved towards a great tenderness for Adamsberg and his sidekick Danglard, and only two books into a series, for an imaginary world so beautifully achieved and generously loaned to the reader that it's a relief to stop out of the real one and just go spend time there. 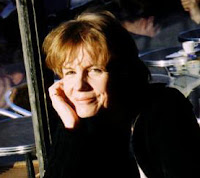 If you want your crime novels to be rigid procedurals, forensically driven and rooted completely in harsh reality, Vargas might fly off into the woods a bit, into the clouds, out to sea. It's a bit like Garcia Marquez and One Hundred Years of Solitude really - in that some people loved that book, but others just couldn't get their tastebuds around the fairy tale of it, the wild unexpectedness of events. She even reminds me a bit of Knut Hamsun, and his early wild creations such as Hunger, Pan or Mysteries. The Adamsberg novels are a sensation and prove with all the bells of Notre Dame on that genre fiction can be as abundantly important if not more so than any Man Booker shortlist out there.
As with Have Mercy On Us All, there is action, eeriness aplenty, and that simply magical mining into the more eccentric, bizarre folkloric stories of the past. There is always an overlay of the past  in the two stories I've read, or perhaps more accurately, the past is always threaded into the present. Shade Point faces a bit of a challenge now - not to read the rest of the series in some mad blitz, like opening a bottle of wine and chucking away the lid for one glass after the other like the all-knowing and glugging Danglard. It will be desperately hard to avoid this, then Shade Point will be left in a state of perplexed longing for the next one in the series, re-reading one or two and finding new layers of enjoyment, but bereft. Plog, indeed, as someone might say in An Uncertain Place.

An Interview with Siân Reynolds

Shade Point was delighted to catch up with the translator of An Uncertain Place, Siân Reynolds, to ask her a few questions about Fred Vargas and her novels ...
There is a very eerie quality to the Adamsberg novels. They manage to unsettle in very subtle ways, without ever resorting to the shock and horror tactics of many other modern crime writers – even though there are some very grotesque moments. As translator, where you must read the text quite intensively, does working among all this eeriness ever unnerve you a bit?


I am not really disturbed by Fred’s books, because the eerieness comes from her background as a medievalist. Like you say, ‘grotesque’ is a good description sometimes. For instance in Have Mercy On Us All (David Bellos’s translation) she is drawing on ancient fears of plague. Several of her recent books have serial killers who have something medieval/wizard-like about them. This last one (An Uncertain Place) dips into vampire fantasy of course, but it isn’t fantasy-lit, more a modern take on it.
One of the things I love about the Adamsberg novels is the incorporation of folkloric, historical elements ...
You can read them if you like as medieval romances, dressed up as police procedurals. Although there’s a surface realism about her police force, it’s not much like any actual unit of the Paris police (the TV series Spiral may be nearer the truth, alas). In An Uncertain Place, there is some corruption in the squad, but it’s explained, not endemic. Adamsberg himself has rather magical qualities - he’s not Sherlock Holmes, working by deduction, and he’s not easy to characterise. He gets sudden memories or flashes of intuition/association which lead somewhere. I think he is more like a medieval knight, journeying through the forests on a quest to beat evil, and he’s gradually acquired various magical creatures or people who help him - his lieutenant Violette Retancourt, a woman with superhuman strength and powers of endurance; his page-boy, Estalere; or his (to my mind more lovable) sidekick Danglard, with the encyclopedic memory and bottles of white wine, etc. There’s actually a magical cat in one book. The supporting cast usually has something special about it, and is always drawn in at key moments. Even Adamsberg’s on-off girl-friend Camille is a bit like la belle dame sans merci - she disappears just when he catches up with her (or else he goes off on an adventure and leaves her).
You have translated a number of the Adamsberg novels now – can I ask you if you have a particular favourite?
The first Vargas novel I read was The Chalk Circle Man. One reason it’s still my favourite is that there was a good central role for a middle-aged woman and a general reversal of expectations. I like novels which do not make women archetypal murder victims for no good reason. There’s another of her books (Wash This Blood Clean From My Hand) with a pair of fantastic old women in it, one of whom is an ace computer hacker.
Crime writing, and now particularly in translation, Vargas, Mankell, etc, is a hugely popular genre. Do you have any book recommendations for Shade Point?
I see from your website that you concentrate on mystery/gothic crime. Most of my favourites aren’t really in that area, but I like well-written books from whatever country: Raymond Chandler, Dashiel Hammett, Elmore Leonard, Robert Parker, Henning Mankell, Jean-Patrick Manchette. Donna Leon for Venice and Ian Rankin for Edinburgh tick the boxes too. I’ve just finished translating a prize-winning book by a young French crime writer, called Antonin Varenne: this is grimmer stuff, more political, more upsetting,
As a final question, do you feel that translators get enough credit? I can’t read French, so wouldn’t have access to Fred Vargas without the work you do, and don’t for a minute think it can be a purely academic and non-creative process ...
Ask any translator and they will always say translators don’t get enough credit! Or pay. But most of us do it because we love it - certainly I do. It’s a challenge. Dialogue and tone are always hard to get. Tricky things are slang, swearing, youth-stuff, because they all date, and don’t always map well on to English. Fred writes well and it’s a pleasure to translate. She has this policeman called Veyrenc who speaks in alexandrines - 12-syllable classical French verse. He does this just a little in this book but much more in This Night’s Foul Work.  That’s hard!

Siân Reynolds has been awarded the Crime Writers’ Association International Dagger for the best translated book three times for her work on the Adamsberg series: for The Three Evangelists in 2006 , Wash This Blood Clean From My Hand in 2007, and The Chalk Circle Man in 2009.
Posted by Blogger at 23:24