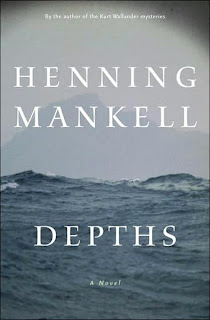 He was a solitary man. His solitary nature was like an abyss that he was afraid he might one day fall into. He had worked out that the abyss must be at least forty metres deep, and that he would leap into it head first, so as to be certain of dying ...

We interrupt this programme for a sort of emotional Shipping Forecast: Depths is a grim, terrible read. If you're not in the market for an extremely depressing book, then abandon ship here, I'd say.

Mankell's Wallander novels, particularly the elegiac closer The Troubled Man, have more than their fair share of bleakness. Wallander frequently seems clinically depressed, and as much as he battles crime, he also spends the series struggling with the human condition. His own condition mostly, but in general too. But, there are thriller structures and detective story conventions at work, and frequent bursts of dark humour to lighten the darkness. Not to mention an overwhelming compassion and love between some of the characters that is such a strong feature of the books.

I searched in vain for the lightness in Depths. It is one of the bleakest novels I have ever read. From the very beginning, depicting a desperate escape from an asylum, it is clear the novel will not be happy. As the title strongly hints, there is only a relentless descent into the darkest depths of existence.

It is 1914, and while the rest of the world is plunged into war, Sweden sits nervously in neutrality. In the surrounding sea, Russian and German battleships are at war. Naval officer Lars Tobiasson-Svartmann is sent on a secret mission to chart the depths of the channels around the Stockholm archipelago to help the country prepare its naval strategy. Against all odds, in something cut from a folktale or dark little legend from the pages of a Saga, he encounters a woman who lives alone on one of the tiny skerries, her husband having been lost at the fishing. Despite the fact that he is married to Kristina back home in Stockholm, he becomes obsessed with this woman of the rocks and sea. The obsession will lead to murder and madness.

Often, it feels like this novel could have been written in a different century. With apologies for mentioning him on this blog again it has something of Knut Hamsun about it. Maybe even a darker, more psychotic A Hero of Our Time or Raskolnikov, even. In typically rambling Shade Point style, I think what I'm trying to say is that Tobiasson-Svartmann seems like one of these contradictory, troubled young men of that era who make inexplicable decisions based on inexplicable passions, leaving the reader's jaw on the floor as tragedy unfolds. As other reviewers have noted, there is a touch of Tom Ripley to him too, largely because of the stunning canopy of lies Tobiasson-Svartmann constructs to hide his deeds. But he's in worse shape than Ripley, this Swedish naval man, much worse - and that's saying something. He seems to belong to an older, darker order. There is a sort of complete unravelling of his character as the novel proceeds, and from a fairly odd, if relatively likeable early impression, he is attacking someone with a hammer, killing a cat, descending and descending into the abyss. At times it is so horrible, it's a struggle to read on.

A reason to read on is the marvellous depiction of this jagged world of tiny islands and frozen seas. There is something at once utterly beautiful and haunting about this setting, the loneliness and darkness of it, the isolation. It lifts to life from the page, and the ice feels real, the movement of the sea feels real, the taste of salt from the sea, the biting of the wind, feel real. It is a masterly achievement. The Great War setting is probably in my thinking here, but it has echoes of that superb espionage novel, The Riddle of The Sands - with the same evocation of charts, channels and the tar, ropes and creaking timber of turn of the century seafaring. Of course, that comparison ends there. Depths has only the skin of a wartime espionage novel like The Riddle of the Sands. It is really about the darkness at the heart of human thought and deed, and the guns of the war only boom away on the horizon, in a different world. 'What war?' asks Sara Fredrika, the woman of the rocks and sea.

Mankell says of this novel that it "takes place in a borderland between reality and my own invention." He is referring to factual details in the novel, and how they are altered to suit the story. But I think he is being more playful than this, and is in some way referring to the whole novel, and not just whether this or that ship is fictitious. There is something unreal about this tale, about Sara Fredrika and her life on the island - a skerry, no more than a rock - or Svartmann's wife Kristina, and her ranks of china figurines. They do not seem like real people, more that they are sort of hyper-imagined, as if there is such a term. Svartmann's descent seems almost incredible, stylised in some way. There is, I think, in the end a quality of nightmare about the whole thing. It seems to lull the reader into literal interpretations, only to dash them aground like a doomed ship. Towards the end, as rumours of his existence spread, folk from surrounding islands say they have heard Svartmann walks on all fours, as if a devil has been born.

In many respects, this intense and compelling novel needs to be read in this way, because reading it as realism would be an impossible, grimmer experience. Characters would make even less sense, their depiction and their roles. Actions would seem more inexplicable. The setting would not seem practical, the movements across it unlikely. But maybe I've got that wrong. Only Mankell would really know if this is a brutal telling of brutal attitudes and deeds, or an extended metaphor on the great distances human intention can travel, from the dread to the good, in a single second, and how easily they can be blown from one course to another.