REVIEW The Quarry by Johan Theorin 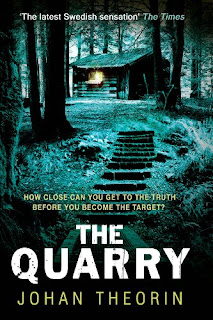 Johan Theorin's The Quarry has been my most eagerly anticipated book of the year. I loved Echoes From The Dead and The Darkest Room was, well, a bit of a masterpiece - and the Shade Point Book of the Year for last year.

Theorin is a brilliant writer, and in this Öland Quartet, he has created the most engaging crime fiction series I have read for some considerable time. Welcome back then retired sea skipper Gerlof Davidsson, one of the most unique and marvellous sleuths on the go. And welcome back to Öland, an island both beautiful and mysterious, a place of dark folklore and legend. The books are crime novels, and then again, they are not. They exist almost in a category of their own, where crime genre conventions meet myth and storytelling out on the mist covered Alvar - a kind of mystical borderland between sea and humankind.
In this novel, Per Morner has inherited the house by the quarry - which will be familiar to readers of the earlier books. He receives a sinister call for help from his father Jerry, which is to lead him deep into a world of murder and intrigue. Along the way, Gerlof helps him to uncover the darker, troubled history of Jerry Morner. Laced into this, as is always the case with Theorin, are undercurrents of folktale - trolls, elves, changelings - and a great deal about the history of these fabulous islands. I recommend  The Quarry highly, it's a great read, but probably also recommend you read the books in sequence - start with Echoes and work your way forward from there. Or at least, don't read this one first.
I say this because I have to admit  The Quarry is probably not as successful as its predecessors in the Öland series. Not a bad book by any means, it's great, but it just doesn't quite hit the heights of The Darkest Room. I'm not even sure this is even a criticism. It's a bit like the ghost novels of Susan Hill I suppose. She has written several and they're all delicious in their own way, but none of them have quite achieved the deadly storytelling of The Woman in Black. So, in places The Darkest Room was genuinely scary - it has at least one outright 'hairs-on-the-neck' moment that is quite unforgettable. The tension in that book builds and never lets go. The Quarry is definitely tense, and superbly written, but never quite achieves the abandonment of disbelief, the total immersion of Darkest Room. Just at times I found myself stepping out of the narrative, maybe thinking such and such a development was a bit too convenient, or noting the absence of menace or otherworldliness that so characterised the early books in the series.
But, I'm uncomfortable criticising this book too much, or criticising it for, well, basically not being another book. It is still Theorin. He still captures the raw beauty and isolation of the islands with great skill, Gerlof is still wonderful, still completely Gerlof. He is Gerlof in the way Adamsberg is Adamsberg, Wallander is Wallander and so on. The characterisation is spot on as always - understanding, human, thought provoking. The book still reads off the page at a rate of knots, and it was still a shame when it ended. The final book in the series is now my new most-waited-for book. Theorin remains a masterly writer and if this novel isn't as near perfect as his last one, it is still head and shoulders above lots of things I've read this year.
Posted by Blogger at 00:19