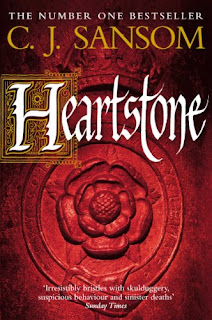 I have been a huge fan of the Shardlake series since Dissolution. I love historical mystery fiction. More than anything, what struck me about that first book, and to this day, is the strength of Shardlake as a character. Like all the best mystery novels, the success of the main investigator as a character is of paramount importance. Shardlake seemed inspired to me, very human, noble and brave. He has his weaknesses, which he seems free to admit to - pride perhaps, stubborness - but he has achieved gentleman status, wealth and some influence, against the odds. In Tudor times, this "crookback lawyer" is as apt to be scapegoated and given the evil eye as he is to move in the court of Kings and Queens. And yet, he does, frequently risking life and limb with his trusty assistant Barak, often at the behest of such royalty and privilege. Always though, it is for the sake of good and truth that he does risk all in the end.

I'm also hugely interested in Tudor times, and the Shardlake series, whether in the endangered monasteries or the great seething dens of London, brings this era vividly to life. In Heartstone, Shardlake and Barak head for Portsmouth, on the service of Queen Catherine herself, who has taken the side of a servant whose life has turned to tragedy. On the way, Shardlake has a mystery of his own to unravel, and will risk his life again as the two journeys cross. They intersect at the height of The Battle of the Solent, as the Mary Rose takes to the sea, and the threat of French invasion crackles across the channel.

So far so good. And I did enjoy the novel. But,  and this is the first time there has ever been a 'but' with a Shardlake novel, I have to say that it took me a long time to read it. It seems almost unthinkable to say this about one of my favourite writers, but in truth, this book might have benefited from being at least 150 pages shorter. In the previous novels, I never found the historical detail to get in the way of the story, the pace of events, but here it did. Without giving too much away, and there is an historical note at the end of the book that perhaps completely explains the impulse, there is often just too much detail - the practices of the archers, the clothing of soldiers, the nature of this, the description of that. On one or two occasions - particularly towards the end of the novel where things take speed - there are frequent sections of historical detail that to be frank, just get in the way. So much so, that by the time the grand finale arrived, and the Mary Rose drifted into view, any digression into historical detail sapped my energy to read on. I'm not sure if other Shardlake fans found this, but I did, and longed for the dark, pacy twists and turns of the early novels. Those novels were filled with classic Shardlake moments - a hair raising precipice here, a sudden discovery there. For me, Heartstone was well underway before one of those moments arrived.

So why am I reviewing it here? Shade Point has a policy of only reviewing 'enjoyed' books. Well, because when I finished it, I was glad I had read it. I love Shardlake and would read about him all day long on a good day, and that admiration doesn't just fall away with one book. Towards the end the novel did pick up pace and I felt on more familiar ground. The unravelling and then weaving of two plots that seemed destined to keep well away from each other was skillfully done. Overall, Sansom's skill in finding the sense of the past, the feel of the past, while keeping secondary to the story, like his early books, was there - creating a kind of pulse of history that is there to set the stage, but not so dense or contrived as to pull the reader out of a spell. But just not all the time. Heartstone makes for an engrossing historical novel maybe, but as a mystery it lacks the tension and dread of the novels before, and this is partly to do with too many instances of this overt 'history' and then to do with the effect this has on the novel's pace.
Posted by Blogger at 01:09