REVIEW The House of Silk by Anthony Horowitz 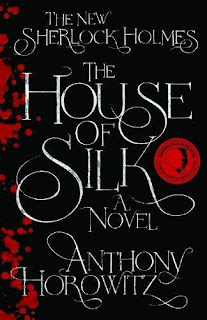 The last few months haven't been smooth reading here in the lighthouse. Somehow, one book after another hasn't really measured up. This may just be a natural order asserting itself - taking care of an imbalance from a rare run of brilliant books in the first half of the year.

It's not that I'm about to say The House of Silk is a bad novel - far from it - but I am going to say that I was largely disappointed. Disappointed mostly because I had been waiting all year to read it. Fooled by hype again, to some extent. I was longing for the book to come out because I'm a huge Sherlock Holmes fan - I love the originals, and would probably go as far as to say that my life was entirely changed from encountering them at a young age. The Canon read and re-read (and re-read again), I have enjoyed numerous pastiches over the years. Some of them I have loved for their audacity (Michael Dibdin's The Last Sherlock Holmes Story, for example) and some for their hugely endearing re-creations of Doyle's world - Barrie Roberts, maybe, or June Thomson. I have even enjoyed Holmes being re-located to America in the series by Larry Millett. And of course, there's a special place for all the Nicholas Meyer books.

So, you'd think this new work, authorised by the Conan Doyle estate, would be right up my pea souper-filled street. Unfortunately not. Likeable enough to make it on the site, but a classic?

There are many positives. Horowitz paced this novel perfectly. He has the thriller knack, that's for certain. Some of the writing, dialogue and descriptive turns are superb. In many ways too, particularly in the first half, he perfectly exploited the now familiar device of an aged Watson finally unburdening himself of one of those cases for which the world just wasn't ready, etc. The emotional interplay between Holmes and Watson is occasionally spot on, and like all good pastiches, for a large part of the story it was a case of diving very gratefully into familiar waters. This, I think, is always the draw of the pastiche - once we have read the very last, the last ever, Conan Doyle Sherlock Holmes, it means a rare kind of sadness. Assuaged of course by reading them all over again. But still there is a hunger for more. Pastiches well done are always a pleasure. And not even a guilty one.

There is a kind of revisionist Holmes to House of Silk, though. This business of it being "New" I suppose. Watson is ready to go gentle into the good night, so he is weighing up his life with Holmes with an acute sense of right and wrong. Largely this works, but occasionally it just doesn't. Holmes and Watson agonise over the use of the Baker Street Irregulars for example - when the Irregulars were really just a piece of escapist fun, and I think this novel makes too much of this. Obviously, it's completely justified in the plot development, but for some reason seems contrived. Watson is also concerned he just hasn't given enough print time to Mrs Hudson. This is baffling - she is such a vivid character in the originals that this apologia just seems daft. Conan Doyle himself, I believe, felt Holmes to be his lighter work, and his historical works the more serious. Time has imbued greater weight to the men of 221b but even still, there's little need to surgically insert different agendas now, I think, however right or modern they may be. The Holmes stories, gloriously, just are what they are. And don't let me get started on Moriarty ...

Above all, though, the denouement, the great crime at the heart of the narrative, is just predictable from early on, and also, I believe, thematically a bit of a Victorian crime cliche of recent years. I won't say what it is, because there's lots to enjoy about this book, but seasoned crime readers will figure it out well in advance. In the end, well, the end is one Conan Doyle would never have written - perhaps because of the moral imperatives and censorship of the day, but maybe too because he just wouldn't. There is something about the innocence somehow of the original Holmes stories, despite the huge body count and occasionally macabre detail - that will always be hugely enjoyable. The streets were dark, sure, but the narratives left some of the worst shadows unexplored. Like many television productions recently, the trip into the far darker reaches seems somehow out of place. And therefore, somehow, it feels like someone using Conan Doyle's characters to tell their own story. Which, I suppose, of course, Horowitz is doing. Maybe I'm just too cranky and over-critical - the book seems to have had widespread hit reviews. But then again, I read one reviewer who said that this was good Holmes, but bad Conan Doyle. I think I know what he means. .

The game, then, is afoot once more, but with revised rules for an even newer century.

For a very interesting Sherlockian take on the book, click here.