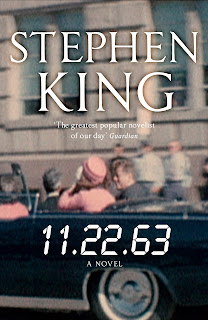 For a moment everything was clear, and when that happens you see that the world is barely there at all. Don't we all secretly know this? It's a perfectly balanced mechanism of shouts and echoes pretending to be wheels and cogs, a dreamclock chiming beneath a mystery-glass we call life. Behind it? Below it and around it? Chaos, storms.

In Bob Dylan terms, 11.22.63 could be called Stephen King's Time Out of Mind. Under the Dome, then, might be called his Oh Mercy. To labour this point, although separated in chronology, both of those Dylan records were produced by Daniel Lanois, but more than that, they seemed connected in spirit, somehow, and they were both extraordinary albums - milestones, I felt, in an astonishing career. Both 11.22.63 and Under the Dome seem a piece similarly, partly because they were both old projects King returned to later in life to complete, but also for their similarities in terms of a new, vaguely sci-fi lining to proceedings. And also, of course, because they are both wonderful novels.

11.22.63 concerns Jake Epping, a 2011 high school teacher who is introduced to a time portal in the basement of Al Templeton's diner in Lisbon Falls, Maine. Al, who is dying, persuades Jake to go through this fissure in time - back to 1958, where the other end of the gap is fixed - and wait until 1963. To stop the assassination of John F. Kennedy. Like Under the Dome, there is no complex rationalisation of this premise. One minute Jake is in the here and now, the next he's having a ten cent root beer out of the fridge. One minute, in Under the Dome, a small Maine town is free, the next it is encased in the dome. For a concept as fraught with "hang-on-a-minute" possibilities as 11.22.63, King just boldly goes. Either, you will then never give it a second thought, or you'll be nagged by stuff for the whole 740 pages. If you go with the former - and like Under the Dome, I found this ludicrously easy - you're in for one of King's best ever books. I loved it. Like Dylan with the Lanois albums - here's that struggling comparison again - in these last two novels, King just seems to have found a new gear, a new insight over more recent work. Not that he was lacking in either of these before, but just that, well, these two books are major pieces. The dome and the time travel aren't gimmicks; they are considered devices that make us accept a way of things, a way of life. In the end, it is the things and the life that are most important, and not the means to get there. 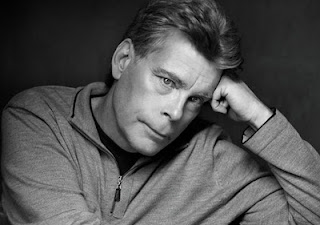 For starters, this is quite a beautiful, at times heartbreaking poem for King's 1950s and early 1960s upbringing. Small town America from this era is just faultlessly re-created. I've read one or two sniffy reviews of the book - mostly calling this depiction 'cheesy' or such - but they seem to be missing the point, I think. The past is an imaginery past, a dream past, a time traveller's past. We're never exactly sure how much is substance and how much spirit - some characters mysteriously seem to be able to see through Jake - almost literally, like Casper - as if there is some haziness, some fragility to the vision. King's 1958 is seen, I guess, through his own memories and longings - a sentimental journey, yes, but I think maybe a necessary one. There almost feels like a working-out going on - like a poet indeed might revisit fragments of their own past to find a truth there for the now. Or Dylan, when he says, "It's not dark yet, but it's getting there" on Time Out Of Mind. And really, if it's sentimental - so what? King doesn't avoid the dark side of the era, he often confronts this head on, so I think it's perfectly okay to go back in time and wonder, maybe, was it better then, did I feel better then, was the world better?

"Other things too. People saying howdy on the street, people giving me a wave from cars, Al Stevens taking Sadie and me to the table at the back that he had started calling 'our table', playing cribbage on Friday afternoons in the teachers' room with Danny Laverty for a penny a point, arguing with elderly Miss Mayer about who gave the better newscast, Chet Huntly or Walter Cronkite. My street, my shotgun house, getting used to the typewriter again. Having a best girl and getting S&H Green Stamps with my groceries and real butter on my popcorn."

And who is Sadie? 11.22.63 is also a love story. A very moving and real love story. As I've said on Shade Point before, Stephen King is a writer who frequently makes me cry. If that's corny and schmalzy, I simply don't care. He does. I really don't know many writers who write about being in love quite so well - not death defying, era-defining love-across-mountains stuff - but real love. The simple love, if I can call it that, we all hopefully can feel at one time or another. Two people, for a bit, for maybe a long time, are basically in tune, belong together, need each other equally. King writes about the yearning, heartbreaking power of this as well as anyone - mostly because he does it so frankly. In this novel he does this in tandem with his love story to the Time of Ago, and with great passion:

"Home is watching the moon rise over the open, sleeping land and having someone you can call to the window, so you can look together. Home is where you dance with others, and dancing is life."

And then there's JFK. King takes Jake Epping back into the maelstrom of the Twentieth Century political conspiracy to end all political conspiracies. In his way, although in his fine Afterword he makes it clear that "nothing I've written in 11.22.63 will provide answers to those questions", King does break it down in the end to what he thinks about the event. No spoilers, though - you'll have to read the book to get his take. What I will say, is that it will be fascinating for anyone interested in the conspiracy theories to immerse themselves so completely in the era, and read steadily right up to the day itself, find themselves right out there on the street, right there. At times it is mesmerisising - the helter skelter chase of the last chapters is breathtaking, the scene set brilliantly:

"The biggest portion of the crowd was on Main Street, but more people filled the Dealey Plaza and lined Elm in front of the Book Depository. They crowded the curb all the way down to the Triple Underpass. Girls sat on their boyfriends' shoulders. Children who might soon be screaming in panic happily smeared their faces with ice cream. I saw a man selling Sno-Cones and a woman with a huge bouffant  hairdo hawking dollar photos of Jack and Jackie in evening wear."

A time travel novel seems perfectly in keeping for King; the strange jolting path of fate, and the power of the omniscient narrator to know what we don't, to know the tracks, has always been a fixture - often devastating - in his work. King will lull us into security, and then in one aside see deep into the future, tell us something is going to happen, that can't be taken back. And when it does, it has lost absolutely none of its impact for the foretelling. In fact, the impact has increased - built towards relentlessy as it had been with dread. This, I think, is something very hard to achieve and King does it over and over - even when the device is familiar, it always works. What the future holds, what we retain of the past, and who we are in the balance of the two, what we can achieve, be and do, is of great consequence for Stephen King - his empathy for the human condition, his love of being here and being loved seems as strong as steel.

11.22.63 is a triumph then. Moving, gripping and historically fascinating. In time, its own 'in time', I think it will become an important piece of work - a fictional insight into the considered reaction of America to one of its epoch making moments, the reaction of one of that country's most important and widely read authors. It will be read alongside Ellroy's American Tabloid and Libra by DeLillo It is also a hugely impressive leap of the imagination, an awe inspiring piece of plotting and multiple characterisation, and a haunting love story. I say this: Stephen King is simply amazing at times.

"We never know which lives we influence," Jake Epping muses at one point, "or when, or why. Not until the future eats the present, anyway."

During the novel Jake Epping is writing a crime novel called The Murder Place. I wonder if that might ever see the light of day?
Posted by Blogger at 02:02