REVIEW When Nights Were Cold by Susanna Jones 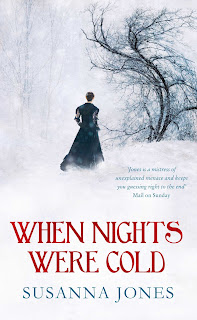 Hours have passed and I am shivering. I could sit down here until I freeze, let frost be my skin and let icicles hang from my chin, let glaciers creep through London and crush my house. It is how I have lived these fifteen years.


Since her superb debut novel The Earthquake Bird, Susanna Jones has been crafting a place as one of this country's most impressive writers. She excels in dark, psychological mystery. Not procedural mystery, with detectives and so on, but the kind of sharp dissection of our devices and desires that reminds me of Du Maurier or Highsmith.

This new novel is her finest, and that's from someone who liked the previous three very much. Something about its chilly madness has stuck with me and I find myself returning often to her alternating worlds of Victorian drawing room and towering mountainside that seem to collapse together - both equally as forbidding and terrorising.

Just before the First World War, Grace Farringdon manages to secure a place at Candlin Women's College - very much against the wishes of her austere parents. There her childhood dreams of ice and exploration will become a reality as she forms an Antartic Exploration Society that will lead Grace and three fellow members into darkness on the alps. Imbued with this sense of adventure by a wounded and tragic seafarer of a father, the novel explores the dreams and fears that steep in the bloodlines of families, and where these single minded obsessions can take us when we let them take over our reason.

In fact, so haunted and chilling did I find this story, that I can well imagine readers lulled by the Romantic cover, the story of derring-do (and there is a wry bit of that here) only to be shocked on finding that here on the snowy peaks there is despair and pain, and locked in the dank rooms of her Victorian home is a madness flooding through all things. In one extremely memorable scene, Grace's forlorn sister Catherine sits on the floor, making endless piles of misshapen ghoulish rag dolls.The whole household at this point seems lost in eccentricity and delusion:

"... there were thirty or forty of them, all misshapen, strangely deformed with heads sewn onto their sides, stuffing falling out, limbs hanging off their bodies. I started at the sight of them. Catherine was snipping intently at a length of blue silk, tongue poking out of the corner of her mouth."

The central mystery at the heart of the novel is a tragedy that takes place on the Exploration Society's first major exhibition - climbing in the alps. It is an event that is described with such a suddeness and breathtaking simplicity that it succeeds completely in framing the rest of the book. It is an unforgettably well crafted moment. From an already unbalanced progress so far, this moment drives Grace into increasingly tighter, more claustrophobic mental spaces. A narrator that had seemed reliable, becomes increasingly unhinged. The reader will be compelled to read the last fifty pages or so in one sitting - driven on by the tension and menace. There are moments towards the end that have almost a surreal, hallucinatory quality, as Grace seems neither in London nor the Alps, but as said before, in some vicious hinterland between the two.

In the end it is a world of ghosts. The reader will move with Grace through one imagining to another, drifting in an out of what seems to be reality, what seems to be the truth of the tragedy in the mountains. But in a way, this is a chaotic world, and nothing is ever as it seems to be. The fiercest of sudden emotions, their reactions and consequences are laid bare in this darkly beautiful book. On a different level, it is about the death of an age - pomp and circumstance and stiff upper lip, dashed and broken on the slopes.
Posted by Blogger at 05:38