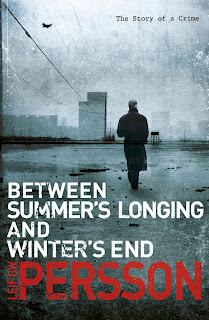 Leif Persson's Between Summer's Longing and Winter's End is subtitled 'The Story of a Crime.' This is remarkable on two fronts.
Firstly,  there is that understated sense of a novel's actual thematic depth that we attach to Graham Greene's subtitling of a novel like Our Man in Havana 'An Entertainment'. To call a novel as complex as Between Summer's Longing and Winter's End a 'story' is akin to calling Picasso's 'Guernica' a 'sketch'. What this does, I think,  is ask us to weigh up the place of one single narrative in the midst of hundreds. One voice in the midst of many. What might have had one effect as we look at the cover with no idea of the contents, has a very different effect once we have read it. Whose story is really being told? Who is telling it?
Secondly, there is an ambiguity at work. There is a crime genre convention in that the reader is quickly aware - at the speed of someone falling, in fact - of the mysterious death of an American in Sweden. That there are suspicious circumstances, there is no doubt. But this novel is also, in the end, about the assassination - still unsolved but with a theory posited in this book - of Swedish Prime Minister Olof Palme in 1986. If this is the 'crime' in question, in Swedish terms it must be like subtitling a novel about the death of JFK, 'a story of a shooting'. What I think is perhaps intended here is a dialogue about the nature of a single act, against the intentions and schemes of many. What is the weight of it all? Indeed, at one point, I actually began to wonder if the 'crime' in question was some sense of a decay in Swedish society itself since the end of the Second War.
This may be too much preamble, but I think there is merit in discussing it, because it seems to head inwards to the centre of this novel - an occasionally bewildering and vast, but always compelling and increasingly impressive tour de force - because nothing is as it seems, the scales of morality and ethics tip one way, then the next, then hover at the balance. Where in the midst of all this paranoia, manipulation and despair does the true story, the truth itself, lie? Is there indeed, only one crime or criminal? One of the characters dwells in this mire early in the novel:
"He had brooded half the night until he saw himself as if in a mirror that mirrored another mirror diagonally behind his back, multiplying him into infinity ..."
So, rather than Greene, it is John Le Carre that Shade Point was most reminded of when reading this labyrinthine novel of police and political intrigue. I'm thinking particulary of novels like The Russia House, and that general era. In the customary way of this blog - i.e. an enjoyment of sweeping comparisons that is really faintly embarrassing - if you imagine a mash up of John Le Carre and Henning Mankell, then you'll be close to my sense of this book. It may be 'The Story of a Crime' but it is not a formulaic crime novel by any means. Characters may indeed be policemen, or secret policemen, but this is not a traditional procedural. With my mind occasionally bent out of shape by its various twists and turns, I can vouch for it being a different beast altogether. Related certainly, but in the way that a wild wolf is related to a fierce labrador. Sweden is given some kind of camera obscura treatment in this novel, held up to the scrutiny of those endless mirrors, and as a reader I could only do my best to interpret it all. What is important about this, I think, is that Persson makes it important to know, and to that end achieves  a quite overwhelming sense of curiosity about Palme's assassination in the reader, a desire to understand, to find out - this reminds me of Stone's JFK. Okay, that film was criticised for lots of reasons, but nothing I've read has convincingly diminished its power to ask questions.
Much has already been said by many about Scandinavian Crime Fiction and the reproductive prowess this literary movement seems to have - from Mankell to Larsson (who I think is just a bit overrated) to Fossum, Jungstedt, Theorin, Nesser et al. There seems to be no loss of momentum. Which is a good thing because the British and American crime fiction scene has been in some ways tiring in recent years, with endless copies of Val McDermid, The Silence of the Lambs, Cornwell, Rebus, etc. These 'nordic noir' authors are all very strong writers. They are something of a relief from the trend in American and British crime fiction to ultra forensic serial killer cliche or simply relocating a successful detective concept to different places and times. Often Scandinavian works are more rooted in reality, in society, in people, than in shock, and therefore are nearly always more shocking because of it. 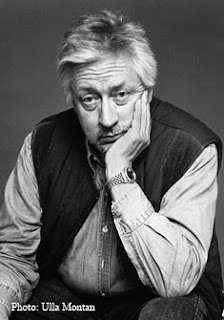 What seems strange to me is the late coming to the UK of Leif G W Persson, who is obviously a major, major figure in his native Sweden. I'm not really a close student of Scandinavian fiction so this may not be the case at all, but it was certainly the first that I heard of him when I received Between Summer's Longing and Winter's End. Which is odd, as I say, because Persson is no "ordinary" crime writer. He is, for example, Sweden's "most renowned criminologist and leading psychological profiler." He has served as an advisor to the Ministry of Justice, has been a Professor at the National Swedish Police Board. Between Summer's Longing and Winter's End was first published in Sweden in 2002, and is the first part of a trilogy which continued with Another Time, Another Life and Falling Freely, as if in a Dream. Persson's most recent novel, The Dying Detective, was awarded Best Swedish Crime Novel of the Year by the Swedish Academy of Crime Writers. He is described as the Grand Master of Scandinavian Crime Fiction - a title which is as ominous as it is impressive! Added to all this, considering the subject matter of the novel, Between Summer's Longing and Winter's End must have been a huge publication in Sweden, a country which this novel suggests, has still to come to terms with Palme's killing. Between Summer's Longing and Winter's End is Persson's only published novel in English, and having read it, this just seems mad.
If you are looking for a simple police procedural, murder, investigation, captured murderer narrative you will have come to the wrong place with this book. That's not to say that elements of that are missing - they're there alright - but they are just one part of a complicated multilayered, multi-narrative enigma code of a novel. What seems like a story with dual narrative strands begins to split, I found, then split again and again, into a babel of voices and viewpoints. At one point towards the end, what seems like an omniscient narrator from on-high steps back, and looks at Sweden since World War Two, as if to focus our minds on the history of it all. But hang on, is this a neutral narrator? Is there any neutrality? Indeed, has Sweden ever been a neutral country? The reader can only read on, and try to take on the full weight of the endless questions. "This country is in the process of completely going to hell," considers a character at one point.
Part of this is the struggle to find a conventional protagonist to pin trust and hope on. Some of the characters in the book are repulsive, their world view horrendous. On a whole load of counts, a whole load of readers are likely to find some offence in what these devils say, or what they do. There is a sort of Life on Mars/Ashes to Ashes effect at work where the sensibilities of different eras clash  - but with less knowing humour, and more bullets in the back and brutalised dreams. One suspects Persson would share these feelings, and so subjects some of his characters to withering satire, often using the device of internal thoughts immediately contradicting spoken dialogue. Fans of conventional come-uppance will be disappointed though - there just isn't a convenient way out of it all. When it comes, the description of Palme's murder is devastating.
Lars Martin Johannson, a senior policeman who can "see around corners" is probably the nearest to a Wallander figure in the book. Although any comfort in such comparison is debunked quite thoroughly:
"While he made coffee he hummed an old Sven-Ingvars song, great fan of dance-band music and real policeman that he was , in contrast to those fictional opera lovers who seemed to populate every single made-up police station from Ystad to Haparanda."
Affectionate, perhaps, but maybe not. Who can tell. Who can tell indeed which one of the several 'real' policemen one meets during the novel is actually closest to our ideal. Wallander's personal foibles and failings seem suddenly balanced when compared to this roll call of dysfunction, hubris and corruption. Johansson seems the only one who stands out and certainly when he is the prime focus of the story, some sense of stability is restored. But again, Persson may only be playing with us. But most importantly, if the narrative he puts forward is true, then surely some of this rogues gallery must be based on real people, with real secrets to keep and the capacity to keep them by violence ...
Between Summer's Longing and Winter's End is quite frankly a brave and magnificent book. It can be hard reading, but the rewards of sticking with it are immense. It is not, I suspect, meant to be easy. The novel's appropriation by crime genre marketing, like those of the brilliant Johan Theorin, is to to some extent a bit misleading. By the end, I thought that I was probably reading a bit of a political espionage masterpiece, and that if a novel of similar scale and complexity was written about a historical event of such importance in the UK, it would be the focus of intense publicity and discussion. I hope the rest of Persson's work is published in this country very soon.
The dedication at the beginning of the novel seems to take on a huge resonance once the book has been read, and in many ways turns one of those dark Swedish mirrors on truth itself:
"The best informant is the one who hasn't understood the significance of what he has told"
Posted by Blogger at 08:21