REVIEW The Asylum by Johan Theorin 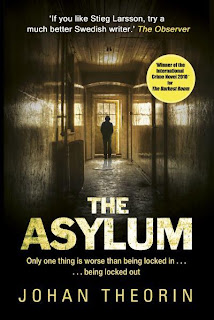 If a darker, more chilling and gripping novel than The Asylum crosses the door of ShadePoint this year, it will be a huge surprise. Already a favourite writer here, Johan Theorin has returned to the form that made The Darkest Room a ShadePoint Book of the Year.

The Asylum has a slight trace of the denouement difficulties that perhaps took the edge off Theorin's last, The Quarry, but is overall a vastly superior book - and The Quarry was actually very good! In many places The Asylum was simply 'unputdownable' to be honest - and very often, it is utterly macabre and screeching with tension one minute and pulsing with dread the next. While largely seen as a crime writer, it seems at ShadePoint that Theorin has always written with strong echoes of horror and the modern gothic and The Asylum is no exception. In many, many ways this book is more the stuff of Jack Torrance and The Overlook than it is the world of Wallander and Ystad police station.

In the novel Jan has started work at the Dell Nursery, an experimental establishment linked to Saint Patricia's Regional Psychiatric Hospital. The children in the nursery are able to visit a parent in the facility next door, and in some cases are resident. 'St Psycho's' is a great brooding stone edifice from the 19th century, looming over the tiny temporary preschool building like a gothic beast behind its high fences and security systems. In the novel's central device, the two buildings are linked by an underground tunnel. It is this almost impossible-seeming connection that provides some of the novel's most haunting and nerve-whittling moments. As I have said before about Susan Hill and The Woman in Black it is the case that a unique, unforgettable setting is often one of the key reasons for a novel's success - and so it is with The Asylum and this chilling underground pathway. In its initial appearances it has an effect not unlike Clarice Starling's memorable walk through those corridors in Baltimore.

Almost from the start, the reader is made aware that there is darkness and remoteness within Jan himself, that he harbours desires to get inside the hospital, and that his own past is as crowded with shadows and secrets as the hospital courtyard when night descends. As the novel progresses, we discover he is not alone in this. The narrative moves through three time zones, and dark inter-connected patterns and horror stories emerge and many of the characters become drawn deeply in. The reader is compelled to read on through this unfolding despair and menace, tempted into the darkness in much the same way that marks Patricia Highsmith's characterisation: as we follow Ripley here, there and everywhere, and the uneasiness rises, still we maintain a connection to this dangerous and difficult 'hero'.

From very early on, Theorin achieves a sense of dread that never leaves. Even considering issues ShadePoint had with the ending - more of which later - the tension is never diminished.There is never an instant where stopping reading seems remotely possible and the novel had that very rare quality of total compulsion and immersion that marks out the great thrillers. It is testament to the drive of the story that any implausibilities are largely ignored as the pages drive on.

Shortly after starting work, Jan sees an old woman 'behind the fence' - she is dressed in black, sweeping dead leaves. He looks away, and looks back:

"But the woman behind the fence has disappeared. Only the pile of leaves remains."

This atmosphere keeps up, particularly as Jan's backstory emerges and Theorin plunges the reader into the basement of the hospital, trapping us in a series of darker and darker holes, forests, and tunnels. And there is one downright shocking scene towards the end which anyone with claustrophobia will have a really hard time reading. A baby monitor system is also employed in one of the most unusual ways since Andrew Pyper's The Guardians and there is an old rickety lift put to unbearably eerie use. The reader is led this way through the half light from one setpiece eerieness to another, relentlessly. Are there rats down there, Jan wonders at one point? Quite...

A book like this could easily be unpalatable in terms of the way it presents mental ill health, and the care for people who endure it, but it isn't. This is in part because of the way the narration works, but also in the use of the backstories, and a real sense that Theorin is taking this context very seriously indeed, that he is prepared to work well beyond stereotype, to try to find some truth at the heart of what is going on. Sure, there are a fair few Shutter Island style moments - not least the 'grey sacks' in the basement, the strange twilight figures roaming around in seemingly abandoned parts of the hospital - but on the whole, I believe Theorin's intentions are good, and that despite the thriller centre, the novel has some very empathetic and sensitive things to say.

I have to be honest, and say that unfortunately, the ending didn't quite hold up to the rest of the novel. This could easily be because the rest of the novel is so astonishingly tense and achieved that any ending would suffer, and maybe perhaps because it was just not the ending I wanted.  Either of these are possible - and I suspect the latter. My issues with how the story was wrapped up, however, were in no way significant enough to override what a superb book this is for almost all of its pages - for me. Lots of people will probably love the ending. Without wanting to put too much out there as a spoiler, I just thought that too many ends came together in the last sections, without really needing to, and that there was a slight drop in the immersion factor as these strands snapped together in the closing pages.

This is of course a shame: with a handful of chapters to go, The Asylum was shaping up to be an absolute, undeniable five-star legend in the making. Having said that, the further I move away from reading the book in time, the less and less this denouement worry seems to matter, and it may be that I'm wrong about that ending. What sustains of The Asylum is the endless tension of the story, the brilliance of setting, and the skills of a thriller writer of great talent - not to mention his translator - pushing as close as can be to the very top of the game.
Posted by Blogger at 08:04