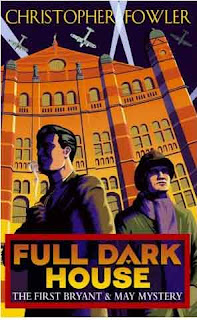 They argued about criminal psychology, endlessly revising their conclusions, but sometimes, when the sky was lower and the colours were drained from the Embankment buildings, they talked of women they had loved and lost, of plans made and abandoned, of outlandish ideas and unrealized dreams; often they just walked in comfortable silence, enjoying the lightness of air across the water, letting the sunlight fall on their faces.

For me, Christopher Fowler's 'Down' was the stand-out story in The End of the Line, which I reviewed a few months ago. There was something about that story, its scariness, its emotional pull, its atmosphere, that just resonated with me the most. On the strength of that ghostly gem I chose Fowler's first Bryant  & May mystery from the Transworld Crime Caper list.

I didn't know what to expect. I did a bit of background research, and in the end decided I was in for a kind of cross between Ngaio Marsh and The X Files. As it turns out, it was sort of that, but so much more. While Reading Challenges may be good for getting us to read new things - and the Crime Caper has a particularly brilliant focus - in the case of Fowler, this Challenge will be bad for the old bank balance: I now want to read and own the whole Bryant & May series!

In summary, the novel is set alternately between Blitz era and modern day London, and lingers in atmosphere somewhere on the misty lines between the real and the otherworldy. Bryant and May are detectives for the Peculiar Crimes Unit, and they are brought in to investigate an increasingly macabre series of murders in a London theatre. While that sounds straightforward on the surface, the story involves connections with the spirit world, brutal murder, stuffed cats channelling the beyond, Greek tycoons, grotesque phantoms in the black out, and some straight out comedy - almost as if the press office in Scoop was redrawn as a branch of Scotland Yard - and much more. I'm not kidding - this is like diving into a giant vat of all the stuff you love about Conan Doyle, Wells, MR James and so many more fantastic period writers. Full Dark House wears these influences proudly while boldly creating its own unique world. No small trick that.

Frankly, a novel that lives in both the real and the surreal, the supernatural, is always going to be a hit at Shade Point. Shade Point is more firmly in the 'Creeping Man' Sherlock Holmes world, than that of missing plans and jewels. That's a crude outline, but it captures I think a bit of the identity of books that will always be a winner with me. Christopher Fowler's Bryant & May novels look very much as if they may occupy that midnight clanking mistiness as well, and often I was fairly gleeful as Full Dark House piled on the macabre and the mysterious period detail, with a chillingly realised horror sensibility that actually reminded me of James Herbert at times.

But I'm doing this novel a disservice in a way, because it is more than this. Like all the best mystery novels, it is a marvelous evocation of place, London, and a hugely moving depiction of a great friendship, albeit in the early stages in this novel. It is a love affair with London, a place I am in awe of in many ways, and a journey through London's past, often throwing up hugely fascinating little vignettes of life in the city in the Blitz, some of which were complete eye openers and often very moving. I saw a review somewhere describing this London almanac quality as being a bit like Peter Ackroyd. I see that - and love Hawksmoor - but I'd actually go out on a limb and say that maybe Fowler's London is more wonderfully realised. To boot, Bryant and May are superb characters - believeable, and yet not of our world somehow. Holmes and Watson were like that for me too. They occupied a magic space as well as a historical one. Bryant and May, their relationship and their safety just matter, and very soon into the novel too. They are marvelous creations.

As the novel hurtles towards its conclusion it is best to hang on - to your reasoning and expectations. Dead ends are met, implausibilities and unlikely events are piled on top of each other, and disbelief occasionally stretched to the limits. But none of this matters - this is a novel that creates a world with its own rules and likelihoods. It isn't realism. It reminded me of  Mark Frost's The List of Seven for some reason - a book I must hunt down and read again. Populated with endless referencing and allusion, Fowler is an incredibly knowledgeable fellow I think, occasionally this lies a bit too thickly over the narrative - but as a first novel in a series a great deal of groundwork has to be done and often I think wild enthusiasm just takes over.

Constantly interested in book covers, I found the cover of this book slightly misleading, and wondered often if this was why I hadn't picked up on this series before. It is a superb illustration, but in a way it doesn't capture the book for me somehow. There is a darkness that is missing somewhere. Something about the macabre aspects of the book are not captured by the Boy's Own Story retro style. The work on the PCU website is more how I see it. There is a lightheartedness in the book, a warmth, I won't deny that,  and a square-jawed  hero quality, but its not the whole story by any means. I'm really interested to see where the books go as the series progresses.

Hats off then to Mr Christopher Fowler, this is just superb. I raise a hip flask of black market whiskey to Arthur Bryant and John May.