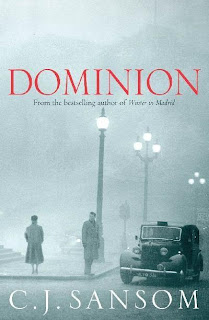 C.J. Sansom is one of my favourite writers, and I'll read anything he puts out.


To digress from the main point of this review, I often think of Sansom whenever the subject of digital publishing and e-readers comes up. Years ago I was on a ship, in a storm, and I was reading Sansom's Shardlake novel, Dissolution. I have such a clear memory of this experience, such a vivid 'book-memory', that every time I think about Kindles and so on, I think about this episode and can't help wondering if we will lose this strong connection to the memory of particular physical books and the part they played at times in our lives. I remember completely the crashing and rolling of the ship, and just as clearly, the rapt turning of the pages as my first introduction to Shardlake and his world unfolded. I sort of remember that book now much as a friend, keeping me company while a Force 10 bashed us about the sea. Ever since, Sansom has been a special writer for me. And every time I ponder the move to reading a black plastic container rather than a paper book, I think of Shardlake and his embossed cover. Apt, I think, for a writer with such dedication to interpreting the past.

I guess I'm also telling this story rather than getting on with the review because I want to be absolutely clear that even though I'm slightly disappointed by Dominion, as I was by Sansom's last Heartstone, I really am a big fan. I think he may just have temporarily entered into that 'massive novel' era that Stephen King had for a while, where the size of the books and the readability seem to be heading in slightly different directions. I felt the same about Heartstone -  Dominion could easily have been 200 or more pages shorter. Like Heartstone, I was at least a hundred or so into the story before it started to grip and for a while was genuinely worried I had found a C.J. Sansom novel I couldn't finish. I needn't have worried of course, stuck with it and by the end felt hugely rewarded, but briefly, bleakly, it didn't look good. More of this later.

Sansom praises one of my favourite books, Fatherland by Robert Harris, in his bibliography. Dominion occupies similar imaginative ground. Britain has conceded defeat to Nazi Germany, and to all purposes is now a puppet state, while war continues to rage between Russia and the Nazis - even to 1952, when the novel is set. Into this scenario, and Sansom spends a great deal of time outlining the social, political and demographic details of it, the reader joins a desperate chase as a group of resistance activists seek to rescue a scientist from a pyschiatric hospital in England and deliver him by submarine to America, so that secrets he has gleaned from his visiting brother from the States are not lost to the Nazis.

Now, Sansom has clearly done an enormous amount of research and an enormous amount of thinking about this alternate British history. The book is crammed with great detail about how Britain might have turned out as a place to live day to day, and framed against some fairly huge strategic thinking about how the country would be placed in world events. This is undeniably a superb feat of the imagination, and to a certain extent the description is fascinating and for some readers it will be a pure joy. It is a very 'historical' novel, even if it is an alternative history. His reading list suggests exhaustive attention to detail and this is borne out by the background work in the story.

While it takes a fair time to get going, Dominion does become thrilling - the last third in particular being essentially a chase, a lethal hide and seek. The reader grows to care for the central group of characters, and indeed, the secondary characters caught up in the drama - most movingly in the fate of one of the secretaries in the civil service office of the main protagonist. Hunted down by British Special Branch and a grim SS officer by the name of Gunther Hoth, the group struggle to secure their human MacGuffin, the scientist Frank Muncaster. The world this story moves through, shabby, impoverished, dangerous, is incredibly well described and there is always a sense of great threat in the setting.

This threat in terms of plot, though, is diminished by the length of the book. Bluntly, the reader could be allowed greater room to move about for themselves in the imagined world - it is in the end, too relentlessly described. For the first third in particular, it seems impossible for there to be any dialogue between the characters that does not in some way flesh out the various dimensions of setting. Often, this extends to the backstories of characters, where not only their own journeys, but what these journeys represent in the historical infrastructure, is related in detail. Often it feels as if the characters serve the setting, rather than the other way around. The issue here may in the end be whether the reader comes to this novel expecting a thriller - I did - or historical novel with thriller elements. The latter is the most accurate. The loser in all the detail is pace.

In the thriller, like Fatherland, if it is well done, the writer can throw away much of this detail, and just suspend the readers' disbelief as the story rattles along. It may sound cheap, but we really don't mind - we're prepared to go with the story come hell or high water. Whether this particular politician did this, or this particular treaty led to this and then that, and how plausible this is, is to an extent unimportant - albeit a critical balance that is hard to achieve. In Dominion, while undeniably brilliant in its scope, the creation of the backstory takes over far too often in the first half. This leads to some fairly jolting exposition during discussions between groups of characters as it is further set out.

At the same time, I also think of other writers, Graham Greene for example, who could set thrilling novels in intensely complicated political situations, eg The Quiet American, without either swamping the reader in detail or reducing in any way the difficulties of the times, or lessening our concern to understand them accurately once the book is finished. In his historical note, Sansom continues to describe his political reasoning for the novel in detail, his fears for the future, and sets this out in clear terms, as well as working through several strands of the speculative thinking for the setting (supporters of the Scottish National Party may well want to stay clear altogether!).

The thriller expectation is also diminished by, to my mind, two implausibilities. Firstly, the reader must sustain over nearly 600 pages the core idea that somehow in a matter of minutes enough of the secret that makes Muncaster the centre of the chase could have been conveyed to make it all necessary, while at the same time having predicted what the secret was likely to be for themselves. Secondly, in a world where brutality and unbelievable deviousness are the norm, we need to believe that the Nazis - as implacable and deadly as Hoth and his cohorts are - would be unable to simply walk into the institution where Muncaster is kept and take him immediately. There is an explanation for this, which seems almost bureacratic, and it doesn't really work - not when people are murdered in the streets and tortured throughout. As a thriller reader, I can accept readily a sketchier outline of hugely important historical background, but have greater trouble with these problems.

But having said all this, I did really enjoy it overall, and by the end, felt incredibly pleased to have read the book, and certain that once my struggles with the detail of the setting are forgotten, what will be remembered is a bold, ambitious and deeply thoughtful novel with a strongly empathetic historical sensibility, written by one of our foremost historical novelists and thriller writers.