REVIEW In Search of a Distant Voice by Taichi Yamada 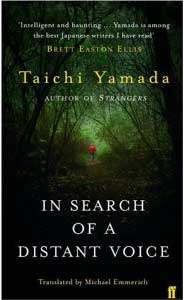 Turn to face this way -
Mine as well, this loneliness
The end of autumn.

For some reason, having always intended to read Strangers by Taichi Yamada, I haven't yet. I'm going to get a move on and read it immediately now that I have read another of Yamada's books, In Search of A Distant Voice.
I have read reviews of this short novel where people take issue with some of the jacket puff that suggest it is a "scary" book. I can sympathise with this to some extent. But, Yamada's is just a different type of supernatural writing, and it works extremely well in its own way. In fact, the patience with which the novel is built to its conclusion is to create, I think, a specific and extremely chilling point of tension at the very end. In some ways it is a surreal piece, in others almost hyper real. If ghosts really do exist, might this be how they really are? Is Yamada travelling out there on the edges, closer to an answer than most of us?
The book is about Kasama Tsuneo, an immigration officer in Tokyo, and how his interaction with a woman's ghostly voice in his own head/outside his head unseats his shambolic attempts to live an ordinary life. He is trying too hard to lead this normal life, see the frankly surreal engagement party scene, in order to escape a traumatic past. The novel winds its way towards his uncovering of the source of this voice, and the results of his attempts to make it corporeal.
I'm reading The Little Stranger at the moment, by Sarah Waters, and co-incidentally, a review blurb by Hilary Mantel on the jacket sums up In Search of A Distant Voice perfectly. Talking about the other book, obviously, Mantel uses the expression "the queasy borderlands between the supernatural and the psychopathological". This just is In Search of a Distant Voice. The events in the story are either the hallucinations of poor Tsuneo, or they are they intervention of a hidden dimension. Maybe they are both. The reader flits back and forth across this line with Tsuneo throughout the whole narrative, and this discomfort about what is actually happening is what finally makes the book haunting, creepy, disturbing ...
I liked it a very great deal. It is an eerie meditation on the nature of the supernatural, mental disintegration and total, utter human isolation. In fact, it reminded me very strongly of two books - books I read more than a decade ago - Knut Hamsun's Hunger and Notes from the Underground by Dostoyevsky. These are horror stories in their own way, ghost stories, that embed the reader in the mind of someone dismantling, fraying, falling. In Search of a Distant Voice tells of the unravelling of sanity, the possibility of our interaction with the beyond, and the terror of being human.