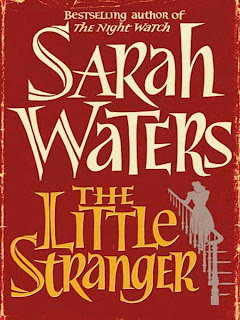 THERE ARE POTENTIAL SPOILERS IN THIS PIECE, I'm afraid ...

The mailboat has brought over some fantastic books of late. The last few I have reviewed, certainly, are books I enjoyed a very great deal. I can now add The Little Stranger by Sarah Waters to the success list.
It has taken me a heck of a long time to get around to reading it. I'm not quite sure why. Partly, it was silliness: I read a piece somewhere when it first came out in paperback saying that it wasn't scary enough. Also, and this maybe marks me as some extra kind of buffoon, but the minute something is on the Man Booker list, for some reason I just don't want to read it. (Note to self, ask analyst friend in Chicago about this). I might be a buffoon on that score, but the person who wrote the review overweighting the relevance of the scare quotient may be close behind me. I say this because appreciating The Little Stranger is way, way more complicated than this single issue, and it actually is scary ... more of which later.
Now, SPOILER LINKS SPOILER LINKS, The Little Stranger has created a great deal of debate and discussion, which is often the mark of a great book. This collogue, in large, centres on a crucial aspect of the denouement and comes from the reader's understanding of the narrative voice. Now, that's as far down the road to ruining your enjoyment of the book as I should probably go - suffice to say, once you've actually read it, you can join Waters herself for a discussion of it here and a great and continuing debate over at Asylum. I did. And I did, because I loved the book, and I loved the mystery of it.
It is just after World War Two, in Warwickshire in England. Austerity and rationing and the trauma of conflict are the spectres haunting the countryside. The Ayres family, landed gentry, are the occupants of the once dazzling Hundreds Hall, which has now fallen on exceedingly hard times. Into the lives of faded aristo beauty, Mrs Ayres, her daughter Caroline and war-shattered son Roderick, comes non-descript, chip on shoulder, unambitious Dr Faraday. As the novel unfolds, the relationship deepens, and apart from dips into related narrative, the story is told largely in Faraday's voice.
There is something of a cross between Charles Ryder of Brideshead Revisited and Arthur Kipps from The Woman in Black about Faraday initially. Certainly, Ryder's obsession with Brideshead and its occupants is very strongly recalled, but this is an alternative Brideshead - as if that grand house were re-imagined by Poe. In fact, as they are huddled together in their motley collection of furs and outdoor clothes, ghosts of the past round their dwindling fire, the aristocrats are so ghoulish they reminded me of the riders in Cormac McCarthy's darkest masterpiece, the incomparable Blood Meridian. An upper class family from The Texas Chainsaw Massacre (exaggeration alert ...).
The continuing story grows darker and darker, and the reader is embedded there like some unwilling bystander, aghast as events turn deadlier and more grotesque. Rather like In Search of A Distant Voice (which I reviewed last week) there is a continued creepiness and edginess, which although it won't satisfy those wanting to be terrified out of their wits, builds to a darker, more macabre atmosphere that will stay with you a long time. And, like Yamada, it also builds to a set-piece which I would argue is terrifying, and frankly as tense as hell. If they make a film of it - please do - this scene in the right hands could end up being one of those classic moments of scary cinema. I can see Mark Gatiss in the Faraday role.
The ending of the book (SPOILER POSSIBILITY!) is where the debate will come in for some. It is certainly one of those novels where one's interpretation of the ending will be vitally important to the novel's lasting impact, particularly for those of us who want to be certain what it means. See the links above for more on that. What I will say, however, is that for those of us immersed in the mysterious genre, we will maybe be more on Waters' wavelength from the very start. Without meaning to be pompous about it, genre fans know the rules, we know the references. I'm not saying that ultimately that means we'd be right in any interpretation of this novel - just that we'd be prepared in advance to expect a debate. That Waters knows our genre is evident from this page on her website, where she lists her favourite ghost stories.
Whatever, The Little Stranger is a wonderful book. It acts as a massive metaphor - and I mean that in a good way - for the passing of an aristocratic ideal - but it also works as a laser sharp dissection of the darker ambitions and desires of human beings. Do these desires live outside of us, do they have an energy of their own, a compulsion of their own? The novel is written beautifully, paced superbly and comfortably sits on the crossover line between establishment literary fiction and genre classic.
A lighthouse is not like a mansion, but this one has a similar roof to one in The Little Stranger - it's in the keepers' house, bulged with water, decayed and waiting ...