REVIEW The End of The Line 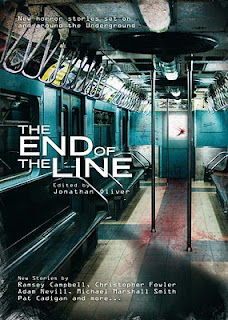 It is the middle ground between light and shadow, between science and superstition, and it lies between the pit of man's fears and the summit of his knowledge. This is the dimension of imagination. It is an area which we call The Twilight Zone.
— Rod Serling
Why the Twilight Zone reference to open a review of an underground-themed Horror anthology? Well, and I hope this is broadly understood as a positive, it's because the altered perceptions and twisted endings of that classic series were more in my mind while reading the stories in The End of the Line, than, say, a collected ghost stories. I'm never too bothered about the fine borders between genres, but I like thinking about them, so would even go as far as to say that one or two of these stories are more psychological sci-fi than horror, and often the more successful for it. In fact, on more than one occasion I found myself thinking long for 'Tharg's Future Shocks'.
Nearly all the successes in the anthology, certainly for me, are more about leaving lasting impressions and fixing images and ideas in our unconscious than, say, trying to scare the living daylights out of the reader. Play with their head, yes, terrorise them, no. It may seem a grim damnation for a horror anthology, but I wasn't particularly scared by the stories - except once or twice. But this isn't meant to be criticism, because in the end it didn't really matter. Lots of the stories were about bending perception, luring the reader into bizarre mindscapes and familiar yet unfamiliar territories. I enjoyed these stories for what they were, and in some cases, for what they have left behind: disturbing little imps of imagery that get on the train with me, hang around the station at night ... In time, perhaps, some of them will bed in, and stay. Sure, I expected and would have liked to cower under the bedcovers in sheer fright a bit more, but never mind.
Backtracking, this collection of broadly Horror-genre short stories is focussed on underground networks of some kind, whether these be traditional tubes and metros or more adventurous imaginings. The selection features writers I'm not too familiar with, and several that I am: Adam Nevill, for example, or Ramsey Campbell. Like all anthologies, I enjoyed some stories more than others. The tales all play on fears and imaginations - claustrophobia, entombment, disaster - and dwell on intersections and redirections in the normal patterns of things. They imagine horrors underground, and horrors in the minds of those who go underground, or even, like Dostoyevsky's Underground Man, those whose minds are doing the going underground. The stories that take the thematic suggestions of underground as their centre, will probably sustain longer than those who use it largely as a setting.
The story that scored the most direct hit in terms of my own basic fears of underground train travel was James Lovegrove's chilling 'Siding 13'. Anyone with even the faintest tendency to claustrophobia on the tube will find much that is ghoulish and appalling about this tale. Adam Nevill's hellish 'On All London Underground Lines' plays on similar fears, but plunges the reader into some seventh circle of infernal despair in the process. Are they zombies? Are they demons? Are they feeding?
I also liked 'The Lure' by Nicholas Royle a great deal. There is something insidious about this creepy Paris-based yarn that has stuck with me - perhaps the disturbing man in the mask, perhaps the breathless narrator as he descends into the surreal and the damned, literally and metaphorically. Perhaps it's the slightly subversive take on a Paris affair, like a Kristin Scott Thomas movie crossed with Lovecraft. Anyway, this theme, one way or another, of descent and disarray and the reversal of normal traffic, normal progress or understanding, is common to many of the stories. Going underground, as I say, travelling into some interior state, happens often. Gary McMahon inventively plunges his narrator into similar circumstances, but underwater, in Antarctica.
Conrad Williams' 'Exit Sounds' took this movingly into the world of the personal, into the depths of grief and loss. Mark Morris took us down a mineshaft - in a place eerily reminiscent of Morwellham Quay here in Devon - and writes the nearest, I think, to a traditional ghost story. Pat Cadigan's 'Funny Things' is like a tube map of memories, emotions, and inchoate loss - directions are there, but we get lost, we get off on wrong stops, nothing is as it seems.
Christopher Fowler's 'Down' is my favourite. The narrator's reason for being in a hellish circumstance is completely plausible. When he becomes isolated in this circumstance, it is entirely believable. The story is genuinely unsettling and haunted. It ends superbly.
Look, there's a signpost up ahead. It's for the tube. Ignore it, take the bus instead. It's just hell down there.