FILM REVIEW The Woman in Black 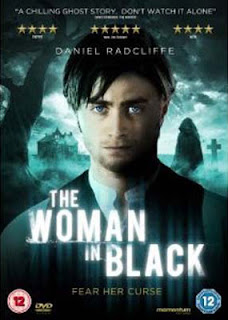 There not being a cinema in the vicinity of the lighthouse, Shade Point had to wait for the DVD release of The Woman in Black. This meant a very long period of avoiding reviews with spoilers, and generally staying clear of all mention of the film where possible. Obviously, this was hard. With the involvement of Daniel Radcliffe, and the studio involvement of the resurgent Hammer, it was always going to be a film in the spotlight.

A film adaptation of Susan Hill's The Woman in Black is a big deal here at Shade Point, for the simple reason that I consider it one of the Twentieth Century's best tales of the supernatural. I have read it several times now since the early 80's, and while some of the terror diminishes with familiarity, none of the atmosphere is unwound, and none of the superb storytelling grows any less wonderful. I think it is easily one of the best books I have ever read.

Now, I also think it is one of the scariest, if not the scariest book I have ever read. Having recommended it to one or two friends who find themselves slightly less terrorised, I know that it depends a great deal on what scares you. But I have to say that the first time I read it, the book just about whittled my nerves to splinters.

Susan Hill muses on the popularity of the story herself on one of the DVD extras. For my part, I think one of the great strengths of the novella is the setting. Like Jack Torrance and The Overlook, the action is cut off from the rest of the world, all escape routes - temporarily at least in The Woman in Black - are blocked. In the book, this quality is enhanced very much in Conan Doyle fashion by the choice of names for these sepulchral places - Crythin Gifford, Eel Marsh House, Nine Lives Causeway. When I was a child, I was spooked royally in a similar way by the great Grimpen Mire, Baskerville Hall, Merripit House. The evocation of the mist and water, the decay of the house, the settling, settling darkness - all these Hill achieved with unforgettable success. A deep dark menace lives throughout The Woman in Black.

Hill's novella was of course written in the last decades of last century, but it was a powerful evocation of great ghost stories from the era of Conan Doyle, of Dickens and his Signalman, of the legendary MR James. Not long after publication, or at least it seems now, The Woman in Black was adapted for Christmas viewing - very much in the style of the great BBC Christmas ghost stories - by Central TV. I remember being well and truly chilled by that one. Unfortunately, apart from clips on YouTube or hideously expensive Region One used DVDs - this adaptation is now hard to get a chance to see. Apparently, it is tied up in some rights issue. This is a crying shame - it was great, and also, it would make an exciting extra disc in any Special Edition of this new adaptation.


Which, at last, leads me to the new adaptation. Conan Doyle was not such a digression, however, because more than anything, assessing this film reminds me of the complicated back process that goes on every time I watch a film version of The Hound of the Baskervilles - another major favourite book. I have seen countless versions of that one - some great (Jeremy Brett, for example) some okay (the recent BBC one with Richard Roxburgh) and some bonkers (Hammer). The process that takes over is a continual cross reference between what happens on the screen, and what happens in the book. In the past, this was often a tortured process. It used to be a case of "That isn't in the book!" and "Why can't they just follow an already outstanding storytline?!".

I'd be lying of course, if I said that is no longer completely so. But I was determined to watch this version of The Woman in Black without as much of this carry on - to some extent I now accept that while I know and love certain books, I'm not a film maker. I'd also already read enough fissures in reviews and magazine articles about the new Woman in Black to know that some liberties were being taken, some new angles exploited.

Two lines of review were in my mind the whole time: does it recreate that incredible atmosphere of the novel, and two, is it scary?

For the first, yes it does - very well in fact. Crythin Gifford is actually almost exactly as I imagine it from the novel. The Nine Lives Causeway is wonderfully done. Eel Marsh House, for some reason, is bigger in the film than I would have imagined it from the story, but it is certainly an eerie, tortured place. The interiors of Eel Marsh, created at Pinewood but not so that you'd notice, are also superbly creepy, forming into long corridors of darkness and suspense. Without giving too much away for anyone who might not yet have seen the film or read the book, the main room in the house in terms of plot development, is incredibly well realised. A horrible, creeping dread-filled place. I was reminded of some of the great Japanese and Korean horror films of recent years in the way that the angles of the house are represented, the way that movement is all around us, behind us, drifting suddenly past us, or there, way ahead, moving our way ...

Is it scary? Absolutely. Sometimes this is achieved by shock tactics which aren't a major part of the make up of the book's sources of terror, but are part of the language of horror cinema. Other scares are just created by the great work of make up and costume - there are just some genuinely chilling characters who flit back and forth in the film. Sound effects and soundtrack are superb as well. These things are the meat and drink of the scary movie, really, and The Woman in Black doesn't disappoint. If it is a bit hell for leather at times in comparison to the steady drip of scares in the novel, well, this is just cinema. I think the film-makers obviously respected the source material a great deal, that's really clear, but they also probably wanted to have a hit film, and scare the living daylights out of folk. The film did well, and they succeeded.

I can't get with the criticism of Daniel Radcliffe that I've read either - namely that he is somehow too young to play Arthur. Maybe this is more a personal reaction than a proper reading of the work, but I was in my very early twenties when I first read the novel, and frankly I 'read' Arthur to be a young man, and that's how he has always seemed. In the long passages where only sound effects reign, I thought Radcliffe's gaunt, white faced anguish was perfect for the story. To an extent, it is not Radcliffe's fault that Kipps has a different back story.

Yes, there are one or two additions and embellishments. Some work, some don't. But none, overall, spoil what is a darkly successful adaptation of the book. I'm not sure how Hill views it, but I'm hoping that with her presence on the DVD extras, she likes it. She's involved in the intended sequel as well, which is surely a good sign. I'm not bothered at all by the sequel - I know some fans are - because I think moving the story to a completely new century is a clever way to do it and Hill is apparently involved in the screenplay.

The 'Woman in Black' herself was well done, although in one of the few criticisms I'd make of the movie, I think she was underused. At the risk of getting back into book versus film stuff again, there is a scene early in the book where Arthur encounters her at the funeral of Eel Marsh's owner, Alice Drablow. This was such an important set for the suspense and the introduction of the back story, that I feel the new film missed the chance to re-create that bit of creepiness. The make up and costume for the 'Woman' were also well done, so it wasn't that she wasn't scary herself. I know there is the element of what is not seen making things even scarier, but she was often slightly too obscure, in almost a kind of 'Grudge' style, whereas in the novel, there are moments of supreme ghoulishness when Arthur gets an early, good look at her. We're in fear of her ever on. Her own story is told in flashes here too, and some would be forgiven for not quite getting it on first viewing - whereas the book achieves this powerfully.

So, all in all, this was well worth the wait. The adaptation in no way dismantled and despatched one of my favourite ever books, and nor did it let the audience down in frights. Maybe it had to invent a few to keep the cinema audience on the edge of their seats, but that's the movies. Above all, it succeeded in creating that malevolent atmosphere that was such a huge part of the book's success. I hope this film series does go from strength to strength - for the reason that this original work, this story, this character, and this setting deserve to pass into the mystery and terror iconography of the literature of this country - the Hound of the Baskervilles, Dracula, Frankenstein. I believe it to be that good a source story.
Posted by Blogger at 01:52