BOOK OF THE YEAR 2013: House of Small Shadows by Adam Nevill 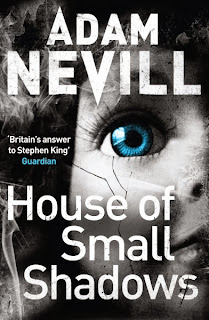 ShadePoint's Book of the Year 2013 is House of Small Shadows by Adam Nevill.


Choosing the Book of the Year here at the Point is a very informal, unsober process, and roughly speaking it amounts to spending a few days over the festive season mulling back over all the books featured on the site that year with a view to deciding principally which one resonated the most, which one left so many little dark corridors and cupboards in the memory that stumbling into them from time to time now seems guaranteed.
Some books are decidedly brilliant at time of reading, and they may be technically brilliant as well, but months later, with time passing something of them fades somehow.There is a recollection of a fine book, but just not a book that has got under the skin. So it is that Book of the Year at ShadePoint aims for the depths!

House of Small Shadows is so laden with powerful imagery, filled with memorable set pieces, that as time passes, it really increases in quality and impact - and that's saying something, as we gave it quite a good review here as it was. There are moments in the book which simply do not have the grace to leave - dark, macabre incidences, characters and locations that hang around like fog. Looking back, the hallucinatory drive of the description intensifies at distance, and the reader is left with a kind of dreamshot sense of things - fragments of storyline that have embedded themselves deeper than was understood at the time. It would be too much of a spoiler to list these, but for ShadePoint, something of central character Catherine Howard's initial trip to the village would be at the top. Do you remember Roy Ward Baker's movie The Monster Club from 1980 - the third short film in the sequence, 'The Ghouls'? If you had the misfortune to have viewed this at the time, as a kid, Catherine's wander around Magbar Wood will evoke familiar creepiness and dread.

Speaking of spoilers, a recurring feature of some reviews of the book centres on the main character and a sense of disappointment that she seems too passive, somehow too easily caught up in what goes on. Unfortunately for Adam Nevill, it is actually too hard to counter this without a fairly major spoiler - an interpretation of this character's actions that is dependent on the reader's understanding of the ending. Basically, ShadePoint had no trouble at all with this character. The world of House of Small Shadows is viewed as if through a filter, or perhaps a miasma, for both characters in it, and readers of it.  Once this clicks, or more accurately, shifts or slides, it's a different book.

Honourable mentions this year have to go to Peter May's excellent Entry Island, Neil Spring's tour de force The Ghost Hunters and Johan Theorin's The Asylum, which was actually a whisker away from greatness.

But, speaking of whiskers, it is Adam Nevill's trip into the dark heart of folk memory, with its haunted houses, grotesque taxidermy landscapes and ghoulish village of 70's nightmare that wins out.

From ShadePoint, very best wishes to our readers for a happy and peaceful 2014.
Posted by Blogger at 06:38