REVIEW In The Shadow of Gotham by Stefanie Pintoff 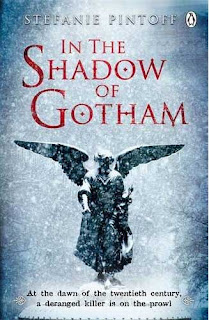 "Then maybe you need to think more like a ghost ... in other words, where does a man like him go when he needs to disappear? If you can figure that out, then you might better your odds of finding him. And you, of all people, should know the places a man can disappear in the city."


All my life I have loved Sherlock Holmes. When other reading fads have come and gone, Sir Arthur Conan Doyle's stories have stayed with me. A side effect of this has been a complete weakness for historical detective fiction set in the same era or thereabouts. Stefanie Pintoff's In The Shadow of Gotham takes place in New York in 1905, and therefore was always going to be something I would want to read.
Already on her third book in the United States - Pintoff has won an Edgar award - this, her first novel, has only just come out in paperback in the UK this year. In The Shadow of Gotham is the first in a series featuring Detective Simon Ziele and tells the tale of his hunt for a brutal killer, aided by pioneering criminologist, Andrew Sinclair. It is followed by A Curtain Falls and in 2011, Secret of the White Rose. 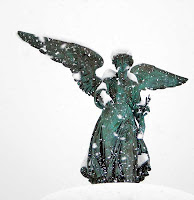 I've read slightly sniffy reviews of the book here and there - suggesting a lack of complexity in the solution - but I liked it a great deal. I liked it because it is just good, escapist mystery fiction. The period details are handled well, and don't intrude like a Scrivener research board that has taken over the whole novel. I don't know much about New York in 1905, either, so I'm not likely to throw the book down in dismay at some perceived historical inaccuracy. The novel is a mystery thriller and it has to be read in that spirit, before the winter fire, glass of brandy in hand - as an entertainment. It succeeds in that sense admirably, I think.
Having mentioned Conan Doyle, perhaps he's not the most obvious marker for potential readers. I have seen comparison with Caleb Carr's The Alienist - which is fair, although that book is much more gruesome - and it's also not unlike Jed Rubenfeld's The Interpretation of Murder. If you liked either of those books, there should be something here for you. It actually also reminded me a lot - partly because of the interplay between Ziele and Sinclair's daughter in law Isabella - of the Murdoch stories of Maureen Jennings.
There are moments where aspects of the likely denouement are telegraphed just a bit too obviously, and the partnering of Ziele and Sinclair and his team happens just slightly too easily, but I found myself not particularly bothered. It was just a book that had me on its side the whole way through. I liked Zeile as a character, I was interested in the New York that bustled around the story, and I was impressed by the dark, wintry atmosphere that Pintoff created. Every now and again you just want to be entertained - not completely bent out of shape with plot intricacies and metaphysical corsetry that crushes the story.