And so begins an occasional series, as Shade Point plots to read the entire Colin Dexter 'Inspector Morse' canon in, well, as long as it takes. Inspired by an extended period of time watching endless episodes of the John Thaw television period, I decided it was time to get thoroughly to grips with the novels which inspired this enduring TV favourite of mine.
The first surprise - I had read only one Morse before, and that some time ago - was that the first in the series, Last Bus to Woodstock, dated from 1975. I was six years old. For some reason I had assumed the novels began in the 80s, or even the 90s, so pervasive is the television adaptation in my thinking. It was quite an opener, to begin this Morseology review saga by going quite so far back in time - well before the internet, the mobile phone and so on. Here was a Morse operating in the world of my childhood, with payphones and people writing letters, more akin to the 60s it seems now, than the eras to follow. 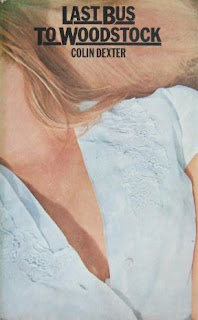 Last Bus to Woodstock introduces Inspector Morse, and his sidekick Sergeant Lewis. Although it's quite hard, it isn't entirely impossible to push aside John Thaw and Kevin Whately from the imagination, as the characters in the novel are different, subtly sometimes, but nonetheless. Lewis, for example, is older than Morse. Morse, while irascible, doesn't have quite the academic haughtiness that he developed as the TV programme progressed - it is hinted at, perhaps, but not fully formed. In his forties, he is a different proposition, fairly hard centred and already quite disillusioned with the world as it is progressing, but he still has one foot in his younger days. No pun intended there, because in one great set piece, a gouty Morse has to buy a size up in his favourite M&S shoes to hide a sore foot when he's out on a date. Somehow, you imagine Thaw's Morse having his shoes discreetly made by some sidestreet cobbler or such rather than Marks & Sparks, but this touching bumbliness in Morse is very well done.

In the novel, we're straight into grim and violent murder. A girl is found dead in a pub car park. Immediately one notices the lack of 21st Century CSI at work in the response - the whole investigation seems somehow bundled together. Lewis does his best at the scene, while Morse sits in a back office slugging Scotch. No different to the TV Morse, the novel incarnation likes a good dram too. Like that other Thaw vehicle, The Sweeney, its a wonder anyone is ever sober enough to get a shift in, let alone solve the crime. At one point, after the aforementioned date, Morse seems to simply get in the car after a bit of a skinful of champagne and the rest. There is a spark between the two detectives right at the beginning, though, that sets up the partnership to come - and while Morse accepts a whisky but Lewis is "on duty", there is something of the mutual respect there that makes the partnership so likeable.

Morse doesn't drive the famous red Jaguar here, but a Lancia. Apparently he does in the end take up the Jag later in the books, as a nod from Dexter to the TV series, and I'll need to watch for that happening. I did, in a vaguely train spotterish way, a good train spotterish way, wonder what kind of Lancia it was, and whether the same principles of classic ownership applied. Comically, when the car breaks down, Morse manages to call out an engineer, have a battery fitted and replaced, and all for under a tenner. And then complain about the price. The vintage of the novel comes across very swiftly in this segment.
In the end, its an enjoyable story, but not without its flaws - particularly, it has to be said, some of the reasoning at the end of the novel which gives rise to Morse's solution to the mystery. Some of it will have the reader baffled as to why it never came up before, or if it did, how they missed it. There is a real temptation to read the earlier sections again to see if this was indeed material introduced in the final lengths. I think it probably is. Nonetheless, there is a typically Morse stumbling on to a conclusion that is certainly part of the appeal of the television series - he gets things wrong, he backs a hunch or even a prejudice, and has to backtrack and start again. Right here, at the very beginning of the novels, there is clearly this humanity and liability to Morse that makes him such an enduring piece of characterisation.
Hard to imagine this novel being the starting point for the phenomena to come (Morse, Lewis and now, Endeavour) with its slightly ragged ending, and feet firmly in an older decade, but that's exactly what it is. I believe it is the strength of the characterisation, even at this early stage, the interplay between Morse and Lewis, and Morse's almost beaten, hunted sort of persona, that is the key. It's difficult to know whether Dexter anticipated this first book being part of a longer sequence, but there is something in the way that information about our characters is sketched in for further elaboration, that suggests he maybe hoped so. This early Morse is quite an important piece of characerisation, I feel, because rather than inhabiting the era of Christie, for example, Morse is really ahead of his time for 1975, anticipating the Rebuses, and even Wallanders to come. There he sits in the middle of this book, a troubled man, waiting for more trouble to come.
Posted by Blogger at 22:23