REVIEW The Blackhouse by Peter May 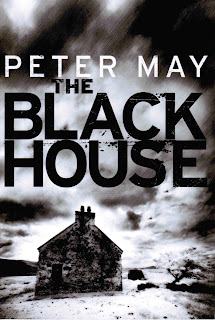 ShadePoint travels a bit late to Peter May's 'Lewis Trilogy'. The second in the series is already out, and the final chapter is due early next year. We've just made the last ferry to the isle, then, arriving as darkness falls.

And goodness me, this is a dark book. It is a procedural crime novel, yes, but really the investigation to the fore is the psychological impact of return - returning to a formative place, having left intending never to go back. Here we follow Detective Inspector Fin MacLeod as he returns to his birthplace on the Isle of Lewis from Edinburgh, in the wake of personal tragedy; that he is to be overwhelmed by the impact of this return is clear from the very beginning.

MacLeod, we alter between first and third person narrative to tell his story, comments at one point on the endlessness of the sky, but generally this is a story that looks inward, not up. The title of the novel seems to capture this - a sense of something old, primitive, enclosed. As an advert for Outer Hebrides tourism, The Blackhouse can only be said to be partly successful, because the novel creates such a sense of the repressed, the seething, the fearful, that at times it becomes hard to breathe in these wondrous, wide-open Hebridean landscapes.

What seems at first to be an investigation connected only to his professional life, becomes a descent into MacLeod's own past - as the jacket suggests, "soon he, the hunter, becomes the hunted." It becomes claustrophobic, with every discovery opening new wounds for the characters - at one point the sheer grief at the passing of time, of hopes, of childhood dreams lays MacLeod so low that he collapses in tears, and it is an incredibly moving scene. This is near the end of the novel, at a point where his journey seems to be taking him deeper and deeper into his own psyche, and the reader can only hang in there with him.

Many reviews have commented on the strange disconnect between the circumstances of MacLeod's Edinburgh life, and his behaviour on the island. This is a fair point, and it may to some extent be explained by the growing questions over his mental state suggested by the dual narrative, but it is an issue that stays with the reader throughout. This is a shame, because overall, this is a very successful novel, and it may well be that the arc of MacLeod's story will be more fully honed in the subsequent books.

There is no such issue with the depiction of the island, however, and it is less of a setting, than a character in itself: a brooding magnet for MacLeod, a cage for those he has left behind, a Picture of Dorian Gray that at any moment may reveal decay and pain. Towards the end, the setting narrows, literally, to a fine, black point, and amidst the ancient tradition of harvesting sea-birds on a remote sliver of rock, the narrative reaches its terrible finale. This is the extreme in the extremes. At the edge of an abyss, Fin MacLeod faces the entirety of his life as he does the dark, the wind and the brutal sea. By this stage, ShadePoint had long ago forgotten that MacLeod was a detective, that this was a crime novel. Maelstrom: that will do to describe it.

So, The Blackhouse takes its place in the growing list of Scottish Island Noir - the Shetland Quartet of Ann Cleeves, Pig Island by Mo Hayder, Sacrifice by S.J. Bolton, Written in Bone by Simon Beckett, and so on. There is something of the Scandinavian appeal to these stories, unsurprisingly as the Scottish Islands retain strongly embedded cultural similarities with the lands of their old Viking heritage. May's book is similar to the new wave of Scandinavian fiction too, in that the lives of the people, their individual emotional landscapes are often as important to the narrative as the procedure, and in fact may even be the story at hand, with the investigation simply the mechanism. Certainly Fin MacLeod's breakdown is similar to the collapsing of many a Scandinavian detective - a moment of terrible humanity to connect us to the people of the story and to ourselves.