BOOK OF THE YEAR 2010 The Darkest Room by Johan Theorin 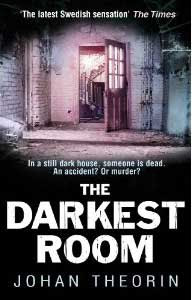 "The dead are our neighbours everywhere on the island, and you have to get used to it."
"It is bitter mid-winter on the Swedish island of Öland, and Katrine and Joakim Westin have moved with their children to the boarded-up manor house at Eel Point. But their remote idyll is soon shattered when Katrine is found drowned off the rocks nearby. As Joakim struggles to keep his sanity in the wake of the tragedy, the old house begins to exert a strange hold over him.
As the end of the year approaches, and the infamous winter storm moves in across Öland, Joakim begins to fear that the most spine-chilling story he’s heard about Eel Point might indeed be true: that every Christmas the dead return..."
I came across Johan Theorin at the tail end of a fairly major Henning Mankell readathon early this year. I love Mankell's books, and now that I had read all the Wallanders found myself looking for something with a similarly Swedish chill. I ended up with Johan Theorin's Echoes from the Dead, which I enjoyed a  very great deal. But it wasn't particularly like Mankell, nor was it much like Stieg Larsson ("If you're a fan of Stieg Larsson you'll LOVE this" shouts the book cover). No, this was something different. Theorin may be Swedish, there may be crimes to solve, but in many ways that's where comparisons with Mankell and Larsson end for me. 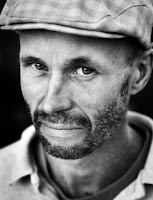 Echoes from the Dead  is the first of a quartet of novels set on the Baltic island of Öland. The Darkest Room is the second. The next in the series comes out in the UK in June 2011. I can not wait to read it. You see, something magical happened within a few chapters of The Darkest Room - the setting and characters, the "feel" of the first novel were gently re-introduced, either as explicit parts of the narrative, or incidental - a very strong continuation of the building of the colour and atmosphere of the world Theorin was creating. Aspects of the island created in the first novel simply re-appeared like old friends, familiar directions and geography. A bit, it has to be said, like the Maine settings of Stephen King. This may seem obvious - write a bunch of books set in the same area and this will happen - but it is a real skill to do this well, to do it seamlessly. In other words, to create a fully functioning imaginary place within a real place.
The Darkest Room also ramped up a supernatural, folkloric element that had been strong in the first book, but now took on a more central role - to the extent that there are moments of genuine eeriness. At their heart, these are crime novels, but they are crime novels that simply exist in a world where the supernatural is somehow part of the fabric of everyday life. In a way, Theorin's work reminds me a bit of the Orkney-set short stories of George Mackay Brown, and how folk tale and reality sit beside each other with ease in those pieces. Often The Darkest Room creates real scares, and very convincing moments of chill and dread. If Theorin ever writes an out and out ghost novel, watch out, he really will scare your wits from their moorings.
It is no surprise then that in an interview on his website, Theorin admits to a strong liking for Stephen King, and Peter Straub and his "strange and beautiful novels". This description could easily apply to Theorin's own work. There is even some element of Magic Realism in his work as dimensions pass gently together, like figures in the island mist, crossing the marshland, but always accepted as just part of the logical progress of the novel. Theorin superbly weaves in stories from the island folklore tradition, particularly through the old sea captain Gerlof. Bizarre, often scary little vignettes appear throughout the story - creating a wonderful backdrop for the mystery unfolding.

No real surprise either that Shade Point would choose a book featuring abandoned lighthouses as Book of the Year 2010 - but this novel really did stand out from all the rest this year. The people, the places and the folkloric imagination of the novel appealed to me a very great deal, and I often find myself daydreaming about making a visit to Öland. It's on the must-go list. As if anticipating how fascinating his imaginary take on a very real place might be to some readers, the books even feature photographic sections at the end, more history, more information, more mystery...
It is a happy accident of the massive hype over Scandinavian crime fiction that Johan Theorin has been published in this country. He sits apart from easy genre classification and is arguably tacking a different course to many novelists he might be lumped in with. He is a writer, I think, deeply interested in the supernatural, in geography and identity, in history and people and the way these all work together to form narratives about our place in the universe and how we understand it and come to terms with it. His novels openly suggest that there may be more to life and the world than we think, and that all things may not be as they seem. He is also just a wonderful storyteller, one you could imagine being just as comfortable telling a ghostly yarn by some winter fireside in Öland as the swirling snow outside builds into a blizzard in the darkness and the old house begins to creak.