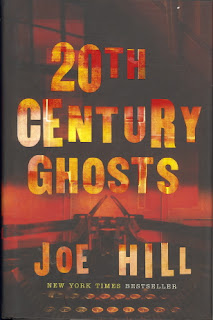 
There’s an old typewriter on the front cover of my copy of Joe Hill’s 20th Century Ghosts. Triple success: I love typewriters, thinking about book cover design, and I really enjoyed Hill’s book. So this has set me off on a brain ramble I’m afraid...

The typewriter on the cover is viewed hazily, as if through fire, or blood or rust - and it's not the version with the eerie man in the top right hand corner. It's a sort of dying, decaying industrial photoshop filter – what often gets tagged as ‘grunge’ on Shutterstock. I can’t stop thinking how moving the cover is – the typewriter being a sort of 20th Century Ghost of its own.

It died, I suppose you have to say, in the last Century. It sort of belongs there now, along with telegrams and penny farthing bikes. I used a typewriter all through University. I even got an antique Olivetti as a present last year. So I miss them. I miss Hemingway clunking away on some Spanish train, or Jack Torrance clacking away in the Overlook, Robert E Howard hunched over his machine while Conan sharpened his axe in the background. Episodes of The Twilight Zone were probably written on typewriters, John Cheever probably wrote ‘The Swimmer’ on one. Waugh, and Brideshead.

And now they’re gone. Soon, if we believe what we read in the media, books will go too, and we’ll have to look at book covers on a screen, the same way we see album covers in a tiny corner of Spotify. Not the way you’d sit poring over a gatefold LP for hours. Reading the details. It feels like we're going to lose texture, the tactile - a proper sense of printed colour. On the train you see rows of people swiping away at their iPads, like automatons in a Dr Who episode.  Keyboards get quieter and quieter, the keys gradually disappearing before our eyes. Maybe eventually there’ll just be liquid paper and we’ll submerge in books, and writers will write in strange multi-touch gestures and thought controlled MS Word. We’ll just float into books, one way or another. Anyone using any device with buttons that click will be next for the wicker man. Except it won’t be a wicker man – it’ll be an aluminium tube or something.

Pure hell. Maybe I should start getting into Steampunk stuff. Because I am going to miss buttons, mechanics and clunky old bits and bobs. I’m writing this on a stern Thinkpad as we speak – no more metal tablets of polished glass is my resolution. Yes, the cover of 20th Century Ghosts just made me think all this. Whoever the designer was, thank you. You reminded me that the machinery of Jack and the Overlook, the click and the clack, the great supernatural writing of the 20th Century, is all passed, and getting further away. The process of creating the stories I love has changed for ever. This is a ramble, yes, but it's hard not to ponder an era that has gone for good.

Except it hasn’t quite. Not in terms of the soul of it all. Step forward, writers like Joe Hill and books like 20th Century Ghosts. Something about the fantastical, psychological, romantic and haunting stories in this collection seemed to belong to an earlier age, a typewriter age. They seemed to have something of the rhythm of the typewriter, almost as if I could hear the ghostly clatter between the lines. They were filled too with references to the golden ages of pulp horror, and referenced magazines, films, stories all the time. Yes, the machine may be gone, but something of it remains.

The "Ghosts" are varied - sometimes actual phantoms (like the ultra chilling girl in the cinema in '20th Century Ghost'), sometimes memories, or hopes and dreams or thwarted love. Sometimes they are real demons; 'Best New Horror' is grotesque and an object lesson in building suspense. Children feature often in the stories, and the work often meditates, I think, on the way that childhood memories will haunt our adulthood. This is often expressed through extremes of emotional response in the stories, most particularly in the tour de force that is the closing 'Voluntary Committal'. This story takes the concept of things seeming to disappear from our lives as we grow older to quite a different level altogether!

Another stand-out is the frankly terrifying 'The Black Phone' which has an ingenious and extremely unsettling conceit at its heart that I won't spoil here. Days went by before I read the next story in the book, I can tell you. 'The Cape' is another stunning story, and one that led me to wonder how much of the fantastic in each story could perhaps be metaphorical, imaginary even - in the minds of the narrators and characters who, in a way, haunt the stories themselves.

I have already slightly broken an intention to never mention Joe Hill's Dad in this review (typewriters and Torrance though - impossible not to reference!) and I'm going to have to let it fall apart now. But for good reason, I think. What I have always loved about Stephen King is the humanity at the heart of his work, and the sense of love between his characters that just echoes the reality of how our feelings work, how families work, how couples work. People aren't elevated to the role of tragic hero or philosopher from nowhere: they are just who they are, fighting to save themselves, the people they love, their sanity. Stephen King is just a damn fine writer who understands the human condition very well, and just happens to write horror novels. Now I haven't bought Horns yet, but I liked Heart-Shaped Box and I loved this collection, and I'm quite prepared to say that one way in which Joe Hill is like his Dad, is in his way of capturing the humanity of the people he writes about. 'Better Than Home', for example, fairly broke my heart when I read it.

It's taken me a while to get round to this book, and I have to thank someone on Twitter for getting me to take it down from the shelf. They said something like: "Isn't it hard sometimes when you're reading 20th Century Ghosts not to burst out crying?". Yes, it is. The book is often very moving, and to return to my pre-review ramble, seems somehow to have distilled an earlier time, and in so doing, makes the reader keenly aware of fragility, impermanence and loss.