REVIEW The Guardians by Andrew Pyper 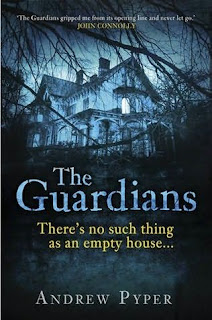 Andrew Pyper's The Guardians is superbly creepy and I enjoyed it a  very great deal. It is a tale of small town horror in the Stephen King/Peter Straub tradition, and sits quite comfortably in that comparison. Pyper is a very strong writer, and like those two giants of the genre, he has the ability to blend the spine chilling with a sympathetic understanding of small communities, and the hopes, dreams and fears of their inhabitants. The novel picks up a strong pace from the very first page, and within only a few chapters has become a complete page-turner.

Returning to his hometown of Grimshaw for the funeral of a school friend, ex-nightclub owner Trevor is plunged into the dark chambers of the past. Nothing represents this journey more than the malevolent, brooding presence of the Thurman House on Caledonia Street, empty and decaying for decades. It is a place of terrible memory for Trevor and his friends, and a house, it seems, his late friend Ben has kept under surveillance for  twenty years ...

One of the successes of The Guardians is the evocation of place, not just the spooky Thurman House - which is vividly realised - but the small town of Grimshaw itself. Although there is a Grimshaw in Pyper's native Canada,  I read a great online interview with the author where he states that he based his fictional small town on his own hometown of Stratford, Ontario. Grimshaw wakes brilliantly to life - the surreal Old London Steakhouse, Jake's Pool 'n' Sports and the aluminium-clad house of Trevor's school sweetheart, Sarah. It is tempting to imagine these being real places from Pyper's own youth. Like the fictionalised Grimshaw, Stratford even has its own Caledonia Street. Does it have its own Thurman House?

The Guardians, I think, posits that all small towns have a Thurman House. In fact, it's probably reasonable to suggest that Pyper is placing the Thurman House on two levels. The first, obviously, as a doomed house with a terrible past. The second, as a symbol in a rumination on the way people carry aspects of their past with them, throughout life, just like the scary old house everyone ran past as kids - something to confront, or run from forever.

The sense of dread that builds as Trevor moves towards his own confrontation with the Thurman House, is achieved by alternating between the present day narrative, and a dictaphone-driven 'Memory Diary' Trevor has been creating since his diagnosis with Parkinson's Disease. This dual narrative is cleverer than it first appears, because it is not just a means of telling the back story while keeping the main story driving along. I think it is meant to emphasise the way in which Trevor and his past will always operate in tandem, each informing the other in constant loops. This is further suggested by the way in which the two narratives bleed across each other, and the adult Trevor and schoolkid Trevor become in moments difficult to separate. In large part this may be because the book is also about growing old, about the reckoning of the bar bill, about the dashing of hopes and the reconciliation of childhood hopes with adult realities. We're a walking haunted house, perhaps, if we don't make of life what we wanted...

I was pretty creeped out by the book, on a number of occasions. The Thurman House, as I say, is a very successful haunted house. In fact, in places, the way that the angles of the interior, the views around doors, the very geography of the place seemed skewed towards fear, reminded me a bit of The Grudge. The original version. The suburban nature of the Thurman House intensifies this horror, and in one memorable scene, the outside world seems to mock those inside the house - normality is only steps away, but further than can  possibly be imagined. Many of the set pieces will live long in the mind, and there are ghoulish aspects to some of the events in the story that really are quite unsettling. One device towards the end of the book was shaping up, I thought, to be utterly terrifying, but was abandoned quite quickly in what was quite a rapid jump to conclusion when things got moving. Maybe, if I had any criticism, it might be the speed of this final unravelling.

I have seen this novel described as derivative, and think I would like to set off in its defence a bit. The prime focus of this seems to be IT by Stephen King. Or 'The Body'. While it's fair to make these comparisons, because there are obvious similarities, I'm not sure when it became the case that no one else was allowed to write any kind of coming of age/small town/supernatural fiction because King has already done it. In terms of coming of age and friendships, from American Graffiti, to The Diner, to The Four Feathers, Great Expectations - it's not as if the fundamentals are particularly unique. I don't think at all that The Guardians was any more derivative than anything else, and it would be a shame if Pyper gets branded this way, when I'll bet there is likely to be a wide variety of concerns in his work to come, and a lot more going on in his work than many writers. As I said at the top of the review you can compare The Guardians to King or Straub, not because he has copied them, but because he writes about similar things, with similar insight and style.

I hear that the book has been optioned for the big screen. I really hope this falls into the right hands, because the story has the makings of a fantastic horror film. Christian Bale as Trevor, I think. Slightly too young, but not far off the forty mark - an age which has a resonance as deep as the bells of Notre Dame in this superb novel.