REVIEW Eye of the Red Tsar by Sam Eastland 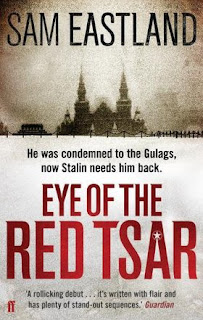 
I really enjoyed this book. It's an escapist entertainment, and although it makes some chilling observations on the Russian Revolution era and leaves the reader with much to think about, it is predominantly a thriller, and is none the worse for that.

Inspector Pekkala, our hero, a kind of personal investigator for Tsar Nicholas II, has been banished to the Gulag after the Revolution. After years isolated in the wilderness, living like a ghost marking trees to be cut down by people who never see him, he is miraculously dragged back into the world of the living. Once a cherished agent of the Tsar, suddenly he is required to serve a new master: Stalin.

Pekkala's task is to investigate the horrifying murders of the Tsar and his family in that terrible basement in Yekaterinburg. This of course, becomes a hugely personal task for Pekkala, a voyage into loss, guilt and disappeared love. Parallel to the investigation, Eastland goes back in time to describe Pekkala's ascent from unfavoured second son of a Finnish undertaker, to the 'Emerald Eye', an all-powerful minder for the Tsar - known for the jewelled badge of special rank given to him by Nicholas himself.

There are some vivid set pieces - Pekkala's grim descent into a mine shaft containing the bodies of the Romanovs, a surreal trip through a Potemkin village, the descriptions of Pekkala's hellish imprisonment after the Revolution. Eastland balances the historical back story with live events well, and maintains a tension in both narratives, which can be hard to achieve. Occasionally, as is often the case with Twentieth Century historical novels, for me at least, when a character like Stalin appears, there is a breach in the suspension of disbelief - somehow I find it impossible not to wonder if the real Stalin would say this, act like that, be this person on the page.

I'm a huge fan of Cruz Smith's Arkady series. As such, a thriller set in Russia, in whichever era, is pushing at an open door for me. I'm drawn I think to these cold landscapes, rather like the Scandinavian crime novels, places of bleakness and mystery. Eye of the Red Tsar is well written, and in a moving historical epilogue, clearly does not borrow the central act lightly - the deaths of the Romanovs is very sensitively handled. In fact, the novel rather impels you to find out more about it - and I think that is a real sign of success in historical fiction.

There are another two novels in this series; I'll look forward to reading them. Eye of the Red Tsar has the feel of an origin story, and I believe that unfettered by Pekkala's backstory, the series might take off completely.
Posted by Blogger at 00:15