REVIEW The Dead of Summer by Mari Jungstedt 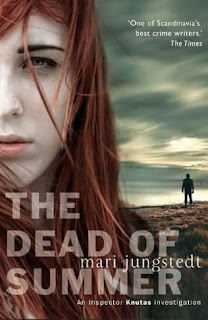 Pia Lilja, an ambitious young journalist in Gotland, rails at one point in this fine novel about the mundane kind of story she has to deal with: "disputes about putting in a new road in Burgsvik, or the complaints of students about the poor quality of the food served in the school cafeteria in Hemse, or the drama of the local championship in throwing the varpa, a flat round stone, to get closest to the pin."

In Mari Jungstedt's Gotland, however, much like Colin Dexter's Oxford, things will not stay sleepy for long. In this fifth book in her series starring Andreas Knutas and his team in the Gotland police, the book is only seconds old when a holidaymaker is riddled with bullets a morning run away from his caravan. Readers of the books so far will relish re-connecting with familiar characters and their troubled lives as the novel unfolds. I feel it is perhaps not as strong a book as the other one I've read in the chain, Unseen, but it is still a very good read.

Jungstedt's focus to a large extent - and this is a feature of Scandinavian crime writers, I feel - is on the people who inhabit the story. She concentrates on the lives of the officers as they battle to solve the crime, and spends time on their personal stories and the way they interact, and how they have done over previous books in the series. There is one superb scene in particular, where Knutas is dragged out for drinks by his colleagues, that has the deepest ring of truth to it. These little asides of characterisation are expertly done, and like Wallander and Co., it is hard not to care a great deal about these very normal, human investigators - and journalists - as they work their way through life.

This is an important strength, because Jundgstedt dispenses very deliberately with a great deal of the narrative tension very, very early - so it is the case that most readers will be well aware of every rut and puddle in the garden path the detectives struggle along initially. This is a brave device, because it creates a a more calm, thoughtful insight, rather than heady tension, mystery and thrills. Once suspects that Jungstedt is far more interested in and determined to relate the human weights and measures at the heart of every detective story, rather than baffle the reader and surround them in chaos. A bit more mystery might not have gone amiss, but there is something very impressive about the way the novel simply allows the novel's resolution to almost fall before the detectives, perhaps in the way such procedural might happen in real life.

Mari Jungstedt is a fine writer, and this quietly enjoyable novel is yet another compelling piece of evidence to suggest that Scandinavian writers remain the stars of the genre.
Posted by Blogger at 01:44