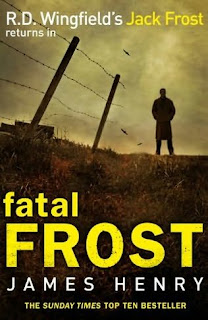 The Kung Po had filled him up and was the only thing he'd eaten since breakfast. He felt strangely content alone in his car. His elusive, possibly ill wife and his wounded, upset girlfriend were far away in another world. He released the ring pull on another can of Harp.

Wired from too long awake in the novels of the Nordic midnight sun, ShadePoint unexpectedly finds itself in the fictional English town of Denton, somewhere off the M4, in 1982 - smoking John Player Special, scooping up Harp and wearing the same clothes to work for three days. The Falklands War is on, Culture Club are in the charts, and 3 million people are unemployed.

Inspector Jack Frost is not the elderly and wayward curmudgeon of the Touch of Frost television series, but a man in his early forties with some of those traits developing - essentially a man in balance. Against the backdrop of a series of burglaries in the town, he is called to investigate the death of  young girl, apparently thrown from a train. Soon this will lead to a deeper mystery, and a second body. As if this wasn't enough, he has to deal with a private life going nowhere, racism in the force, and more or less, the challenge just to keep ahead, and keep going.

Fatal Frost is the second in a series of novels based on the well-known character created by RD Wingfield, but written by the pseudonymous James Henry - in reality James Gurbutt and Henry Sutton. I say well-known character, but not by me - apart from watching one or two of the David Jason episodes, ShadePoint isn't acquainted at all with the character or the original Wingfield novels. It sometimes seems the case that you can only have room in your life for so many detectives, and Frost was one that up until now, had seemed surplus to requirements. There was something about those handful of episodes on TV that put me off, perhaps. Jack Frost just didn't seem to click before.

And so, a plate of humble pie. I found Fatal Frost to be one of the most enjoyable reads of the year so far, and a real challenge to a bit of Nordic Fanboy complacency that had maybe been creeping into the Light of late. I expected something one dimensional, I think, something fairly dull if I'm honest. There is a sense of such an ascendancy of Scandinavian crime fiction in my reading of late, or at least crime fiction in that style, that perhaps I need to re-check the GPS a bit on this evidence. "I'll just start with this and see how it goes," I said to myself. "I can always ditch it."

Well, good job I did. From start to finish, with only minor niggles, I thought this book was a cracker. So much so that I even sent one as a present. Although initially I had a kind of overlay of David Jason in my mind - sort of like the Jason of early Only Fools and Horses - this soon fell away as the novel asserted its own identity. I realised quite quickly the depth in this character, and made regular mental notes to read one of the original Wingfields as soon as I could. Frost began to emerge out of the pages very much his own man.

This characterisation is the first strength of the novel. Frost emerges as a very compelling study - deeply private, and yet a leader and a man able to marshall his team and gain their respect. He is shambolic, often half-pissed to be frank, and hopelessly messy and unkempt. He smokes like a chimney and only notices to eat long after it might have been a good idea. Like Wallander, we are often treated to more detail than we might want about what's going on in this idiosyncratic policeman's digestive system. He has hopes and dreams and ideas that will flit to the surface, but will all too quickly fade again - replaced, always, by a single-minded will to be at work, to get the job done. In one scene, no sooner has he freed a prisoner from the cells has he gone to sleep in the bed they have vacated. There is powerful sense of that duality of sacrifice and duty and yet personal escape from the world about Frost - common to all the great fictional detectives - that is exceptionally well handled here.

With this vital ingredient in place, such a strongly achieved central character, the next strength is the depiction of setting - not just the run down estates and shopping streets of Denton, which are well done - but setting in terms of time. Now, it might help that I can remember the 1980s, but even still, it has to be said that the novels recreates this strange decade with great skill. The supposed riches and consumerism of the late 80s and 1990s are hinted at - with the rise of VHS players, the golf club set, etc - but overall this is an England that is more post-war than Facebook. All the cast, like the team from The Sweeney, are permanently drinking. Lots. They all smoke, and the novel gleefully makes sure we all know who smokes which brand - an illusion that was still there at that time, a kind of marketing con that the brand of fags a person smoked somehow said something about them other than "you're killing yourself" - a 'Bensons Man' for example, Silk Cut, Rothmans, et al.

The novel captures a significance, I feel, in the decade as an end of something, the true end of an age - the twilight of so many old values and ways, the pre-internet times. The book seems to take us up the last flight of stairs before the fit and healthy make it to a new century. Some, the novel seem to say, can't progress that far - things really just were different in those days. It is very easy from this extremely clever novel to trace this man out of time quality that is then carried forward as such a large part of the David Jason characterisation.

To my shame, I had expected Fatal Frost to be some kind of cash-cow cash-in, but could not have been more wrong. It is an intelligent, hugely enjoyable crime procedural, with a deeply fascinating lead character and a such a vivid evocation of an era that the result is completely immersive. Like Endeavour, it is surely a matter of time before someone decides that this series would play well on TV, and Inspector Frost will keep on going into the new century - sweaty under the armpits, smoking forty a day, half-cut, but utterly endearing.