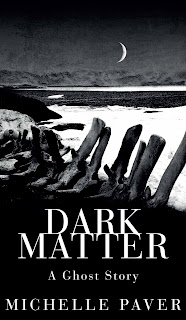 Michelle Paver is the author of the incredibly successful Chronicles of Ancient Darkness series for children, which is published in 36 countries. Dark Matter is her first adult ghost story.

Set in 1937 it concerns a very ill-fated British Arctic expedition to Spitsbergen, and in particular the traumatic experience of its wireless operator Jack. For various reasons Jack is forced to endure the endless dark of a Nordic winter on his own, in a small coastal hut in the sinister and remote bay at Gruhuken. Unbeknownst to the intrepid but naïve explorers, it is a place of terrible memory, fearsome reputation and supernatural menace...


Without meaning to be flippant at all, if you were to imagine a cross between Beryl Bainbridge’s The Birthday Boys, and Susan Hill’s The Woman in Black, you might very well have Dark Matter. It is a classic "Ghost Story" in the BBC Christmas tradition, and very successfully channels many conventions of the form. It is not as brilliantly realised or nerve-dredgingly scary as The Woman in Black, but this is no criticism; that novel remains one of the most superb modern renderings of the MR James storytelling ethos, if not the very best, and indeed was unlucky to not reap wider acclaim than it did, i.e. stacks of prizes. Not as good as the completely perfect then, Dark Matter is nonetheless still brilliant.


To keep the comparisons going, there is also in fact something of Anita Shreve’s The Weight of Water, The Riddle of the Sands and Conan Doyle’s The Lost World about Dark Matter. Even The Thing! It successfully challenges the psychological otherness of remote, dark, northern climes of Shreve, the Boys Own Adventure with barbed wire in the yarn of Childers, and the doomed exploration of Challenger and his cohorts to the place where no one has gone before. Bainbridge’s Birthday Boys are recalled in the innocence, bravery and class symbolism of the Dark Matter protagonists, while The Woman in Black, beyond just the genre similarities, is echoed – an important word that, if you read the book – echoed in the terrible isolation of the main character and the sheer dread that Paver brings up in the nets. All these comparisons are not meant to diminish Dark Matter, but to suggest the atmospheric company it keeps. And The Thing? Well, frozen location, menace, horror ...

Dread is the key. The great ghost stories, for this reviewer at least, live completely in the world of dread – dread rather than shock or gore. If a ghost story is successful, then when you are reading it, and long after, dark staircases seem somehow darker, the wind seems to, well, whistle more, and there is strange movement in the trees, and noises at the window latch – even on modern windows where you don't have latches. This is all worked up patiently in good stories, so that when the dread becomes manifest, it is as if hands of ice have slipped around the reader’s shoulders, and they are afraid. Not shocked or repulsed, although these may be present sometimes, but afraid. Afraid of the dark. Of death. Of the unknown. Reading the book, not reading the book, it is just an ambience that surrounds you like the Gruhuken fog while a story works its way out of your imagination.

Paver successfully achieves this, quietly and steadily, and without the reader overtly being aware of it. Jack’s companions disappear from the scene naturally, but by the end, with what seems complete inevitability. The evocation of endless night in the long winters of the north is captured beautifully and accurately – Paver is a frequent traveller to these regions. Disbelief is suspended when Jack’s motivations for staying – as opposed to getting the hell out – are entangled in his strength of feeling for his colleagues, and a stiff upper lip determination not to let the side down. The Norwegian characters are not Scooby Doo or “Beware the Moors” stock character stereotypes, but seem real and make real moves, decisions and declaration. They are still “other” from Jack and his colleagues, but necessarily so – Dark Matter successfully captures the huge universe between the British middle class Jack and his champagne swilling Toff comrades, their idea of a shared world, and the Norwegian sailors, the landscapes and eternal night of Gruhuken.

And then there is the dark matter – what we know is there, but what remains mysterious. Dark Matter is alive with portents, signs, symbols, scares and ominous foreboding. The novel is determinedly in the atmosphere of the MR James, Le Fanu camp, in that it is a “Ghost Story”, an entertainment to scare us witless, but also a meditation on the unknown, the beyond, and thus, like all good ghost stories, carries with it that existential fear that is as dark and unfathomable as the blackest reaches of night endured by Paver’s characters. What is out there? What is it that we imagine, and what is it that we actually see and know? What is the other? What do we want it to be?

With Christmas on the way, Dark Matter is an absolutely perfect present to buy yourself. Pour a small measure of Three Barrels, turn down the lights and enjoy superb spookiness.